Disclaimer: This product was sent to us for free in exchange for a review. That does not affect our opinion about the product, in this article we list both what we like and dislike. Read more about this here.

The Bluetti EB3A Is A Portable Power Station With LiFePO4 Batteries

In today’s article we are taking a look at and reviewing the Bluetti EB3A which is a new power station from a known brand.

These types of lithium batteries are better in many ways than the more common li-ion batteries found in most power stations. 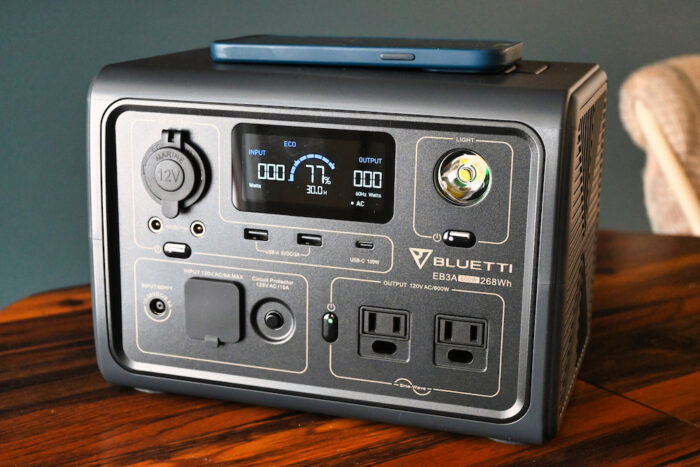 How are they better?

As a customer you’re not going to a difference immediately, but over time you might notice that the battery isn’t degrading as fast as the battery in your phone, for example.

That’s because these batteries are rated for 2500+ cycles before reaching 80% of the original capacity, while also being safer than li-ion.

The more commonly used battery chemistry, li-ion, is usually rated for 500+ cycles before reaching the same 80%.

So why am I talking about this in the beginning of a review of a power station?

Because I want you to understand the benefits of buying a power station with LiFePO4 batteries. Even though you’re going to see other similar power stations that has the same battery capacity and inverter size for cheaper.

Now, let’s get to the review. We’ll start by taking a look at the features.

The battery chemistry used is LiFePO4 (LFP). These types of batteries are rated for up to 2500 cycles before reaching 80% capacity.

The inverter in a power station changes the DC battery power to AC power, which makes it possible to power electronics that use a regular household plug.

Just because it looks like a regular AC receptacle does however not mean that it can output as many watts as one found in your home. 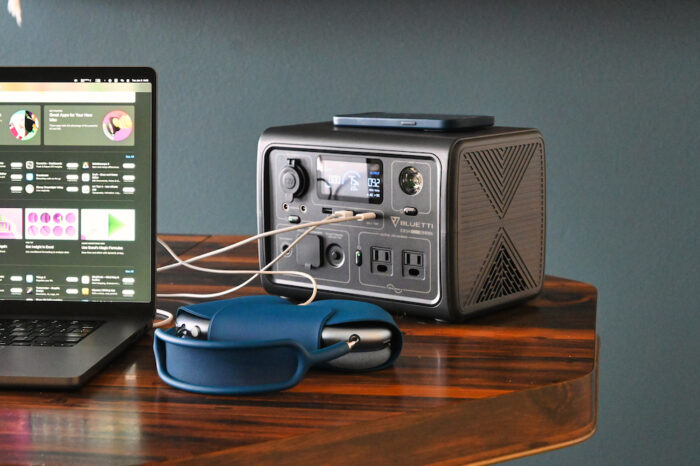 The pure sine wave inverter in the Bluetti EB3A is rated for up to 600W, and a 1200W surge wattage.

Similar to the EcoFlow X-boost, the inverter in the EB3A has a “Power lifting mode”. This allows it to adjust the voltage and current to power certain electronics and appliances.

The power lifting mode is supposed to be used with devices like space heaters and electric irons, but not air conditioners or washing machines.

I did not have access to something like a space heater to test this feature, but the inverter did not have any issues providing around 550W to my toaster for a prolonged period of time.

All ports are located on the front of the power station.

There are two AC outlets, two USB A, one USB C, one 12V cigarette port, and two 12V DC outputs.

As I mentioned above, the AC outlets can output up to 600W. This is in total, not per outlet.

The two USB A ports are rated at 3A at 5V, meaning that the maximum output is 15W.

The single USB C port is rated at 100W, which means that you will be able to quickly charge a lot of different devices with this port. I charge my phone, tablet, and laptop with a USB C cable. 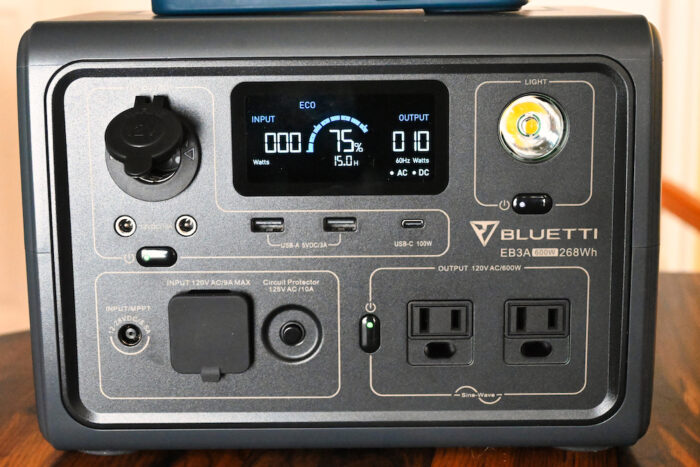 Next to the USB ports are the 12V DC ports. The cigarette port is regulated and works great with 12V fridge/freezers.

There are two inputs, one for solar/car charging and one for the wall charger.

The input for solar charging is an 8mm connector, which is a pretty common one.

Last but not least, there is a wireless charging pad on top of the unit. It’s rated at 15W, which is fast for a charging pad.

The display shows the input/output watts, battery percentage/bars, time to empty/full, active ports, warnings, and which modes are in use. 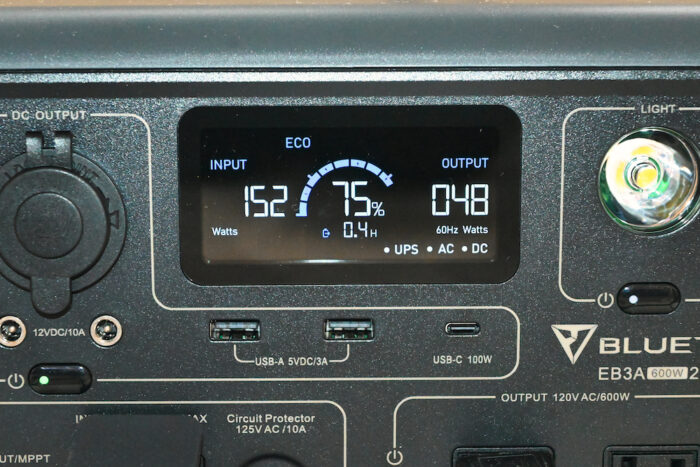 For example, if the UPS mode is active you’re going to see “UPS” on the display next to where it tells you which ports are active at the moment.

With the included wall charger, the Bluetti EB3A can be charged in about 1.5 hours. This is when it’s set to turbo mode, which increases the charging speed.

In regular mode it takes about two hours.

If you connect solar panels, you have to stick to panels that output between 12-28V, and up to 8.5A. It has a 200W maximum, but as always it’s going to take more than 200W worth of solar panels to get close to that 200W limit.

Since Bluetti includes an MC4 to DC adapter, you’re able to buy and connect a lot of different third-party solar panels right out of the box. Just make sure that the open circuit voltage of the panel is within the 12-28V range.

You can also combine two panels in parallel, but not series.

It is possible to charge with both AC and solar at the same time, which will increase the charging speed further. In great sunny conditions you should be able to get a full charge within a little over an hour, assuming that you have both the AC wall charger and 200W solar panels connected.

If you purchase the optional car charger, the EB3A will recharge in about 3.5-4 hours.

Bluetti has released a smartphone app for compatible Bluetti power stations, and it’s a pretty good one.

It lets you monitor and control the power station via Bluetooth.

This is also where you can set the charging mode, upgrade the firmware, and set ECO settings.

The power station has to be already turned on to connect to the app, but once it’s connected it’s very responsive.

There is a built-in UPS mode, and the EB3A is a great power station to use for backup power.

By plugging in the wall charger, then powering on inverter and connecting electronics to the AC outlets, it’s enabled.

The screen will show “UPS”, and the Bluetti will now be able to pass-through electricity without using its battery.

This feature is meant to be used when you’re powering devices that you don’t want to shut down if there is a power outage.

If the wall charger would lose power for any reason, the Bluetti will quickly change over to use the built-in battery and keep your devices powered.

A built-in handle makes it easy to carry and transport the unit, and it folds away neatly when not in use. 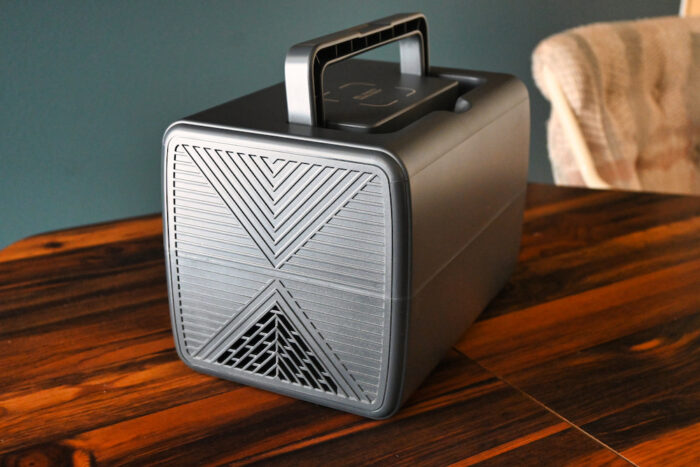 Bluetti includes a wall charging cable, and an MC4 to 8mm adapter.

Using LiFePO4 batteries is a win-win situation for both the customer and the planet.

It makes the power station useable for longer (in terms of years) and that makes me as a customer happy.

They are a little heavier than the li-ion type, but it’s worth the weight for a safer and more durable battery.

I am glad that these 100W USB C ports are showing up on even the smaller power stations.

As somebody that uses USB C to charge most of my devices, it’s excellent and I hope this becomes the standard.

A year or two ago I didn’t have any devices that could charge wirelessly, but now that I do, I find myself using the charging pads on power stations more often.

Most of them don’t have it, though, and Bluetti might have been the first ones to add one a couple of years back. I’m glad they’ve kept doing it though, since there are a lot more devices capable of charging wirelessly now than back then. 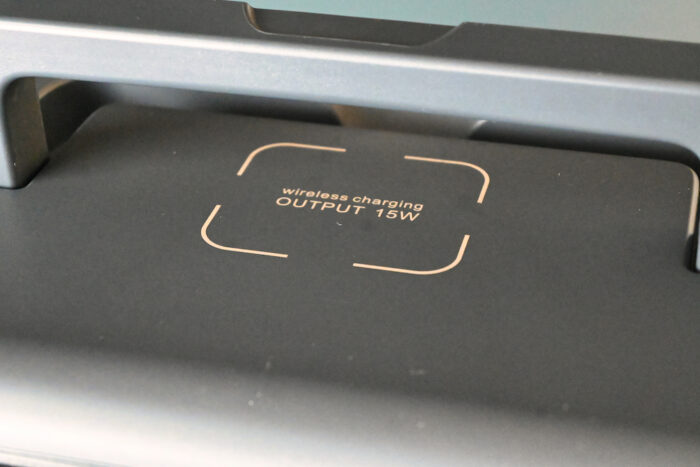 The app is great because it lets me control and monitor what is going on with the power station without being near it.

It can not be controlled remotely via WiFi like the EcoFlow products though, which is a shame. But it’s still an appreciated feature in a power station of this size.

I can’t see it in the app though, and I would like to see it added in a future update.

There are two inputs, yay!

It’s actually great to be able to charge in two different ways at the same time (cough, Goal Zero). Power stations this size are usually not capable of doing that.

This is the first power station I have ever tested that has not included a car charger, which is both surprising and disappointing.

There is a reason that most brands include a car charger, and that is that there are a lot of travelers that buy them.

It’s great that the MC4 to 8mm adapter is included, but why not a car charger?

It might be harsh to mention it on a power station of this size, but I wish the USB C port could also be used to charge the power station.

It can be seen as nitpicking, but the fan curve is aggressive when the battery is charging. That is because it’s charging quickly, especially in turbo mode.

The Bluetti EB3A is a feature-packed portable power station that has a lot of the features that I expect from a power station in 2023.

With durable batteries, a lot of ports that can be used at the same time, a great display, app support, and a 100W USB C output, it’s not a bad deal for the current price.

It used to be that a dollar per kWH was a great deal, now we’re below those numbers and it has happened faster than I expected.

Even though they’re using LiFePO4 batteries that used to cost more on top of that.

A car charger and built-in Wi-Fi would’ve made it even better, so while it’s not perfect, it’s a great option for somebody that doesn’t need over 268.8Wh or 600W output.