Should The New EcoFlow Delta 2 Be Your Next Power Station?

EcoFlow is a company that makes both portable power stations and solar panels.

As a company, EcoFlow has grown exponentially in the past couple of years as they have been one of the manufacturers that has pushed the power station market forward with innovative and modern features.

COUPON: Get 5% off at EcoFlow’s website with code: EFSD5OFF

One thing I like a lot about EcoFlow is that they’re not sitting on their hands.

They understand that you have to keep up to not quickly fall behind in this market. I believe the product I am reviewing today is yet another proof of that.

The new Delta 2 is an upgraded version of EcoFlow’s most popular solar generator, the original Delta released years ago. In this post I’ll be comparing it to the Delta 1260Wh model. 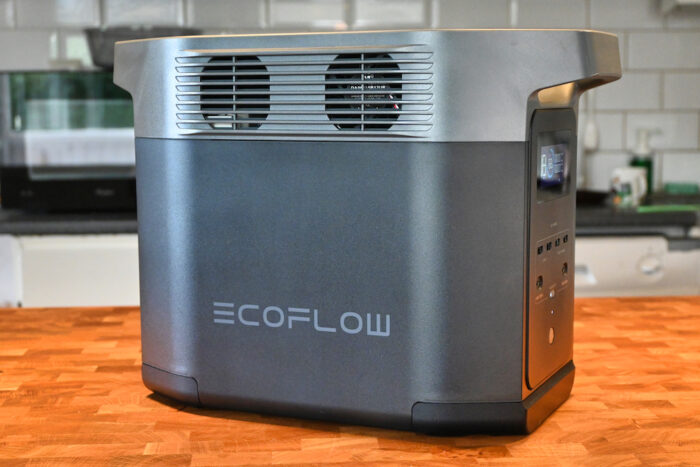 In this review, I am going share the most important features and what I think about it overall.

I am also working on a review for EcoFlow’s largest solar panel, the 400W(!) model. That is going to be posted next week, so be on the lookout for that!

Table of Contents show
Should The New EcoFlow Delta 2 Be Your Next Power Station?
EcoFlow Delta 2 Features And Specifications
Specifications
New features
Review Of The Delta 2
What I Like
What I Dislike
What Can The Delta 2 Power And For How Long?
Frequently Asked Questions
Does it support UPS?
How do I connect a solar panel with MC4 connectors?
Can I combine several panels and connect them to the Delta 2?
Can you use the Delta 2 while it’s charging?
Can I charge with solar and the car/wall charger at the same time?
Can you plug an RV camper into the Delta 2?
How long does it take to charge with solar panels?
How do I update the firmware?
Can you charge it with USB C PD?
Which external batteries can I connect?

On the outside, not a lot has changed when compared to the original Delta. But there are a couple of new features that are going to make a big difference.

Before I go over the new features, here are the important specifications:

You probably didn’t notice a ton of upgrades in the specifications above, so let’s focus on the upgrades over the old Delta model.

Review Of The Delta 2

What Can The Delta 2 Power And For How Long?

The pure sine wave inverter is about 85% efficient, so if you’re calculating how long the 1024Wh battery will last when powering a certain device, remember to multiply by 0.85 to get the most accurate estimate.

The picture below is from Ecoflow.com.

Here are the results of some tests I did:

Does it support UPS?

EcoFlow says it supports EPS (Emergency Power Supply), which should not be used for electronics like data servers and desktop computers that require 0 ms switching. 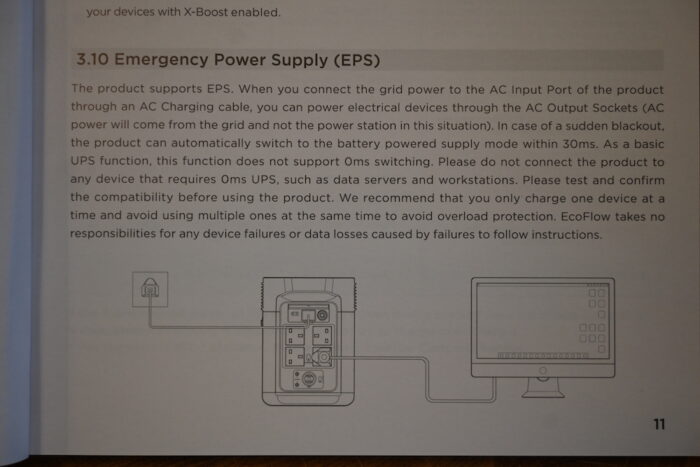 If the inverter is on while the AC charger is plugged in, the power will come from the grid instead of the battery.

The reason it shouldn’t be used as an UPS for things like a desktop computer is that it has a 30 ms delay, which is long enough for the computer to shut down.

How do I connect a solar panel with MC4 connectors?

To do that, you’re going to need an MC4 to XT60 adapter. EcoFlow sells them on its website, click here to view it.

Note that the adapter is made for panels with a positive MC4 male connector and a negative MC4 female connector.

Can I combine several panels and connect them to the Delta 2?

Yes, the solar charge controller can handle voltages between 11-60V and up to 15A, so you can combine panels either in parallel or series as long as you stay within the supported range.

To combine two panels in parallel, use an EcoFlow parallel adapter. This is used to connect two panels with the same ratings, like the EcoFlow 110W solar panel for example.

In a parallel connection, the voltage stays the same while the amps add up.

If you don’t want to buy the parallel adapter, you can also do a series connection.

To do this, take the positive MC4 male connector from the first panel and connect it to the negative MC4 female connector on the second panel.

What you end up with is one cable from each panel, and now you can connect the MC4 to XT60 adapter I link to above.

In a series circuit, the voltages add up while the amps stay the same.

It’s especially important to know the total voltage when combining panels in series, since the charge controller will not accept a voltage higher than 60V in this case but it can handle going over on the amperage limit.

Check the open circuit voltage in the specifications of your panels and add them together if you’re making a series circuit.

Can you use the Delta 2 while it’s charging?

Yes, all ports can be used while the battery is being charged.

Can I charge with solar and the car/wall charger at the same time?

Can you plug an RV camper into the Delta 2?

Yes, with the right adapter you can. I have written an article over on thesolaraddict.com about how this is done that you can find here.

Remember that even though you might use a 30A or 50A adapter the inverter sets the limit (15A/1800W in this case) and you cannot exceed the max output of the inverter.

How long does it take to charge with solar panels?

With the EcoFlow 400W solar panel it takes around 3-6 hours.

How do I update the firmware?

Download the iPhone or Android app, connect to the Delta 2, choose “Firmware” in the app, then update.

Can you charge it with USB C PD?

No, the USB C port is only an output.

Which external batteries can I connect?

To double or triple the battery capacity of the Delta 2, connect either a Delta 2 Extra battery or a Delta Max Smart Extra Battery.