Which Power Station/Solar Generator Around 1kWH Is The Best?

While a power station is not nearly as energy efficient as a gas generator, it’s enough to fit the needs of a lot of RVers, van dwellers, campers, and homeowners.

Related Product: Recharge your power station with a solar panel. The Twelseavan 120W (click to view on Amazon) is compatible right out of the box with all power stations in this article.

Some use them every day (we do), while some only use them as backup power for when the grid goes down.

A popular mid-range size in the solar generator market is the 1kWH size. That means that it can hold 1000 watt-hours.

In this article, we are going to compare three of the most popular brands on the market right now, which are Jackery, Goal Zero, and EcoFlow.

To be more specific, the comparison is between the Jackery Explorer 1000, the Goal Zero Yeti 1000 Core, and the EcoFlow Delta Mini. (click links to view on Amazon)

If you have any questions about power stations, please leave a comment and we’ll get to it as soon as possible.

Without further ado, let’s get into the comparison.

Considering an MPPT solar charge controller for your RV/van? Check out our review of the BougeRV MPPT here (we have an exclusive coupon code for you) 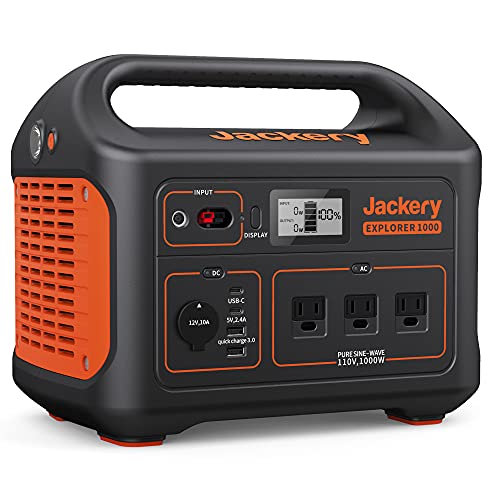 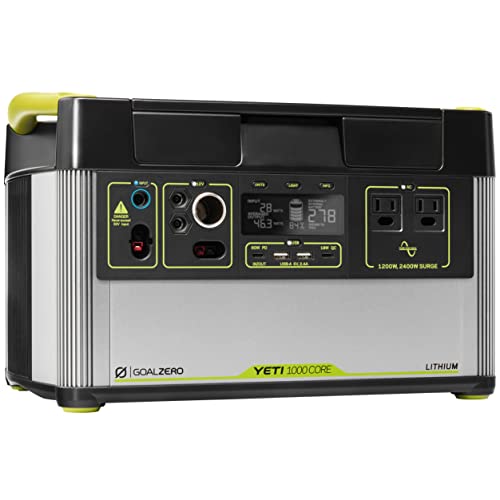 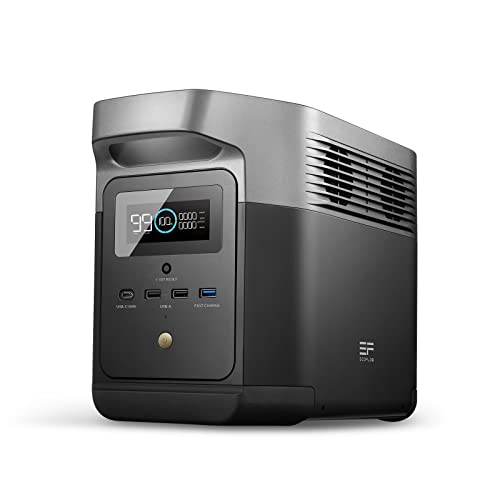 To make the comparison as clear as possible, we’re going to go through each feature and compare them to one another. Then hand out points 1-3, where three is the best and one is the worst.

If it’s a tie, they will all get one point, or if it’s a tie between two they’ll get two or three points depending on the third power station. Then we’ll combine the points and find the results.

Note that we are looking for the best option overall, which means that it’s important to consider which features matter the most to you when you make your final purchase decision.

The winner in this comparison might not be the best power station for your needs.

The battery capacity tells us how much electricity the power station can store when fully charged.

Jackery has the highest capacity at 1002Wh, with Goal Zero barely trailing it at 983Wh, and EcoFlow at 882Wh.

If battery capacity is the most important thing to you, you should go with the Jackery or Goal Zero.

The inverter rating tells us how powerful the AC outlets are. A household outlet is rated at 1800W, and it’s important to make sure the power station you’re buying can power everything you plan on using it for.

The EcoFlow is the winner here, with its 1400W inverter that can go all the way up to 1800W with certain electronics and appliances. That’s powerful enough to run kitchen appliances like a microwave or an air fryer.

If you only need to be able to power smaller electronics like laptops, TVs, CPAP machines, and fans, the smaller inverters in the Goal Zero and Jackery are going to be more than enough.

In terms of outputs, the EcoFlow has the most ports. That is mostly due to its 5 AC outlets. Note that only two three-prong devices can be plugged in at the same time though.

The Jackery has one more AC outlet than Goal Zero (3 vs 2), and they have the same number of USB ports.

One difference there is that the USB C PD port on the Goal Zero is not only rated higher at 60W, but it can also be used to charge the battery.

Goal Zero comes in at second place since it has more output ports in total that are rated higher than the Jackery.

All of them have a regulated 12V port which is great and a necessity if you plan on powering 12V fridge/freezers.

A good display makes it easy to monitor your power station, and Goal Zero is the winner here.

It tells you the input/output watts or amps, time to full/empty, battery bars, battery percentage, battery voltage, and watt-hours used.

The EcoFlow is almost as good, but won’t tell the battery voltage, and watt-hours used, but active ports.

The Jackery display only shows battery percentage/bars and input/output watts.

Both Goal Zero and EcoFlow let you leave the backlit display on, where the Jackery turns off after a while.

The Goal Zero requires 9 hours for a full charge with either the wall or an optional car charger.

You can buy additional chargers for the Goal Zero, which will charge it faster, but this comparison is based on what you get without additional purchases.

What’s great with the Goal Zero and Jackery is that you have two inputs, both an 8mm and an Anderson Powerpole. The downside is that you can only use one input at a time with both power stations.

The EcoFlow has an XT60 input, and a separate input for the wall charger.

The EcoFlow can also handle up to 300W of solar input, but only 10A, which means that you must wire solar panels in series to get more than 120W out of your panels.

I see the Goal Zero as the winner due to having more ports and options when it comes to charging with solar panels.

The Jackery Explorer 1000 can only handle up to 126W when using solar panels, which isn’t even half of what the other two are capable of.

Only the EcoFlow has WiFi-features that let you control and monitor the power station when you’re away from it. This is a great feature that I hope to see in more power stations in the future.

It connects to a current WiFi network, and it works with mobile hotspots as well.

The larger Goal Zero Yeti power stations have been able to do this for a couple of years, but for some reason the latest Yeti 1000 Core does not have it. Two points each to Goal Zero and Jackery, but an easy win for the EcoFlow.

None of these power stations have any way of connecting more batteries or a more powerful inverter.

One point to all three.

The Goal Zero Yeti 1000 Core is the heaviest at 31.7 pounds. It’s also the largest in terms of total volume.

The Jackery Explorer 1000 and EcoFlow Delta Mini are very close in weight, but the Jackery is slightly lighter at 22 pounds versus the EcoFlow’s 23.6 pounds.

In terms of volume, the EcoFlow is smaller than the Jackery.

One clear difference between the EcoFlow and the Jackery is the handle. EcoFlow has put handles on both sides, which make it easy to carry with two hands.

Goal Zero has done the same thing but the Yeti 1000 Core is much heavier.

The handle on the Jackery goes across the top, which is part of the reason it’s larger in volume than the EcoFlow.

Since the EcoFlow is easier and less cumbersome to carry, I am going to have to give the win to the Delta Mini.

EcoFlow includes a wall and car charger, MC4 to XT60 adapter, and a 5.5×2.5mm cable. The MC4 adapter can be used to connect third-party panels.

Alright, the time has come to declare a winner. Let’s take a look at the total points.

There you have it folks, the winner is the EcoFlow Delta Mini.

As you can tell in my review of the Delta Mini, I liked it a lot and said that it’s one of the best power stations that we have ever tested and reviewed.

Feature for feature, it holds up and beats the more popular brands. I think it’s great that these companies are pushing each other to invent, increase, and improve their products. It’s healthy competition in a market that’s booming.

As I said in the beginning, you should still consider what features are important to you. Just because the EcoFlow is the best overall doesn’t mean it’s going to be the best power station for you.

If You Need More – The Larger Power Stations

One thing that all of these three companies have in common is that they make power stations/solar generators in different sizes.

If you feel like the Explorer 1000, EcoFlow Delta, and Yeti 1000 Core aren’t quite as powerful as you would need, here are a couple of options from the same companies that offer more battery capacity and a more powerful inverter.

Goal Zero makes a lot of different power stations, these are the larger models:

Yeti 1000X – Very similar to the Yeti 1000 Core, but has a more powerful inverter and supports the Yeti Link which can be useful for home integration.

Yeti 6000X – The largest power station currently being made by Goal Zero. With a whopping 6071Wh battery capacity. Otherwise similar to the 1500X/3000X

Please leave a comment down below if you have any questions about any of these power stations.