What Is Goal Zero?

Goal Zero is a well-known brand when it comes to off-grid solar gadgets and gear. Over the years, they have been making and selling power stations, power banks, camping gear, and solar panels.

I call their products plug-and-play gadgets. They’re easy to understand and straightforward to use.

DIY solar panel installations can be very complicated to put together for people that don’t know anything about electricity and how it works, so it’s no surprise that Goal Zero has become a popular choice for RVers, campers, van dwellers, homeowners, and survivalists.

I own a Goal Zero Yeti 1000 (click to see the latest version on Amazon) that I plug into my travel trailer.

When paired with my two Renogy 100W solar panels (click to view on Amazon), I can stay out in the wild and generate power while the sun is out so I can use the outlets in the trailer day and night.

I am planning on adding two more solar panels soon for even more power since I use my laptop a lot during the day for work.

In this article, we’re going to compare the Goal Zero solar panels on the market today, do an overview, and review which product is best for what use.

Some of them are smaller for phone charging and power banks, while some are bigger that together with their Yeti power stations can recharge RV batteries, run home appliances, charge a Yeti battery in a van, etc.

There are a lot of different uses for each panel, and we’re going to take a look at what would be best for what.

The first table will include Goal Zero foldable solar panels, and the second will be their bigger options like the Boulder solar panel briefcases. Then I will do an overview review and share my opinions on the panels. 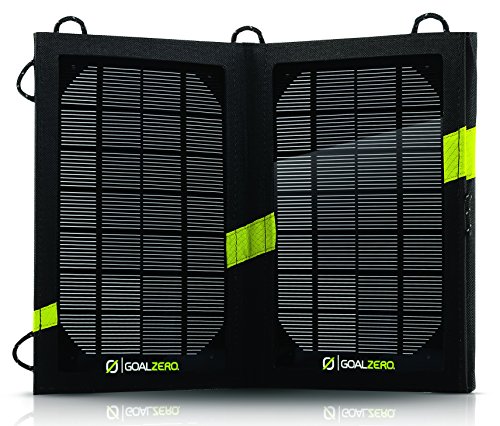 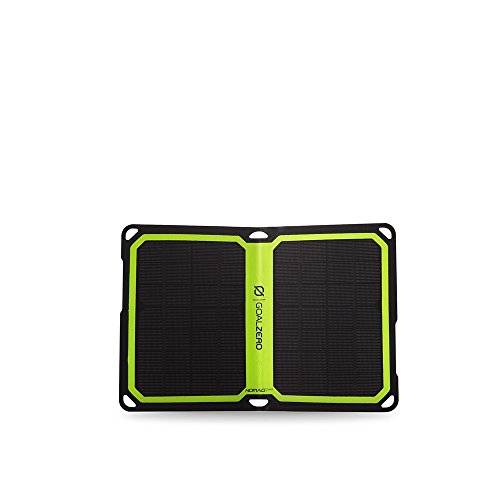 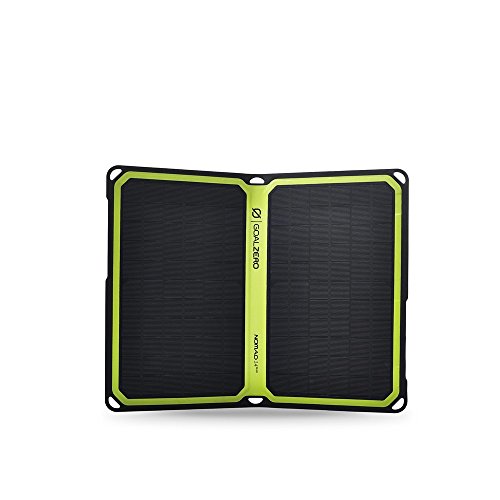 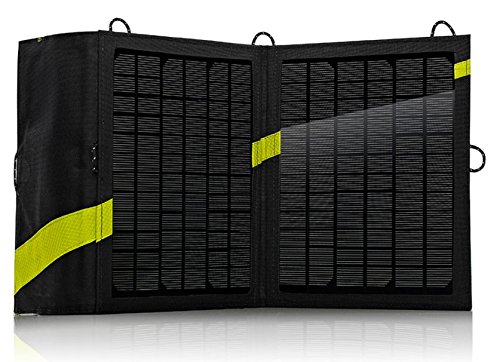 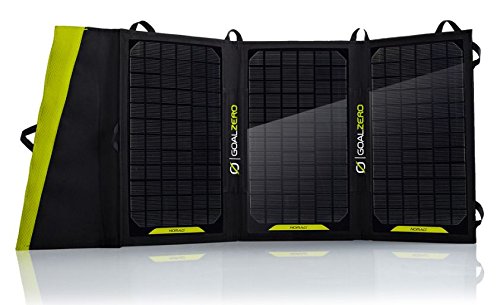 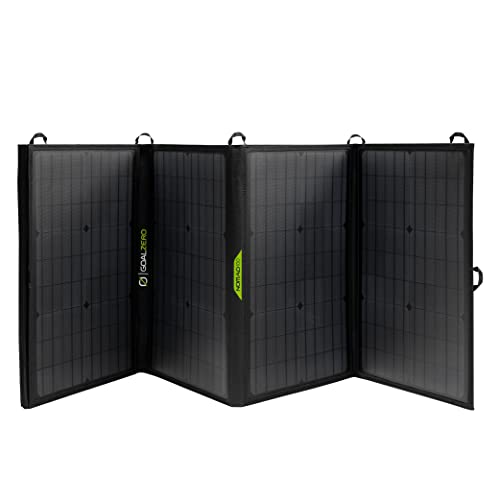 Preview
Great together with Sherpa 100AC 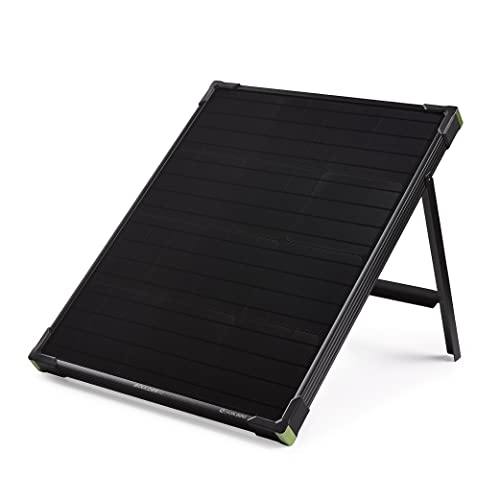 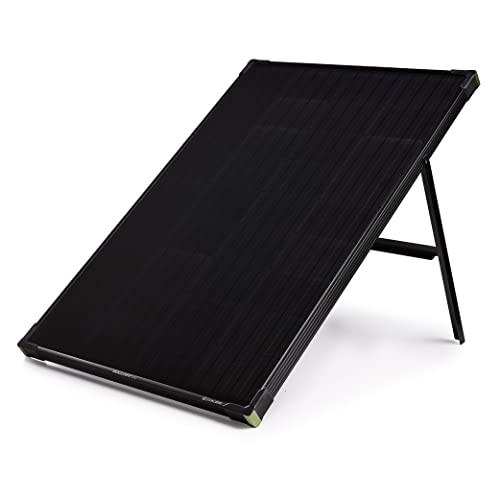 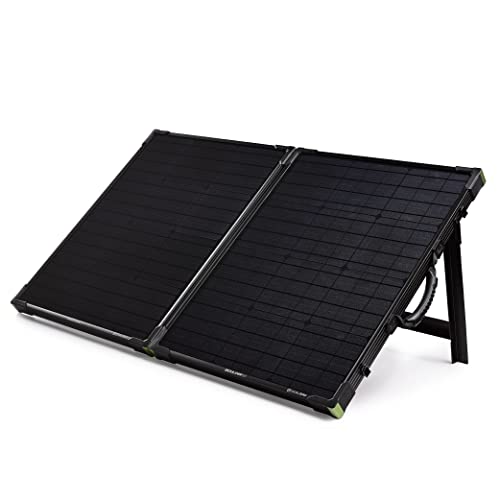 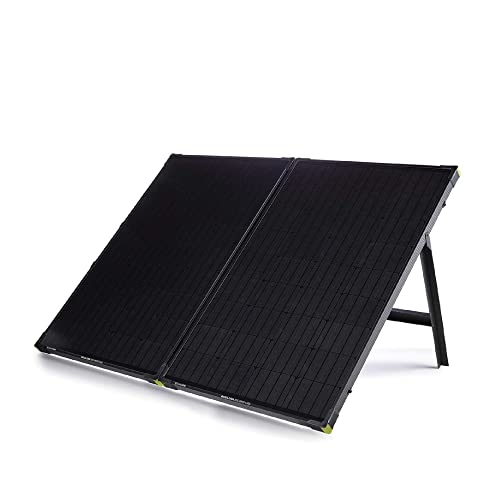 Great together with Sherpa 100AC

How to Use a Goal Zero Solar Panel

Like I mentioned in the beginning, I call Goal Zero solar panels plug-and-play gadgets because they’re very straightforward to use.

That said, each solar panel has different ports and cords coming out of it depending on what you’re going to use it for.

Some only use USB, while others only have an 8mm or an Anderson Power Pole connector.

So how do you use them? Well, let’s first talk about what each of them does and what they’re capable of.

If you haven’t dealt with Goal Zero products before, USB might be the only connector that you recognize.

USB is a known connector that has evolved over the years, and is used mostly for transferring data but is also capable of transferring power.

Solar panels with USB ports can charge your phone by connecting the USB charging cable that came with your phone, tablet, camera, etc. to the panel.

Plug it into the solar panel and your phone, and it should start charging when put in the sun. The USB port can also be used to charge power banks but not the Yeti power stations.

The 8mm is Goal Zero’s cord found on Nomad and Boulder solar panels (except the 200W boulder). This can be plugged into the Sherpa 100AC power bank (click to view on Amazon) and Yeti power stations.

The Yeti lithium models can input 120W per 8mm port. So if you have a Sherpa 100AC or a Yeti power station, pick a solar panel with an 8mm connector.

The Mini solar port is only used to charge the Guide 10 plus power bank (click to view on Amazon) and can not be found on any other power bank or station.

The Anderson Power Pole is the connector you want to use if you’re going above 150W solar.

It’s found on the larger Yeti power stations and is what I use to connect my two 100W Renogy panels (click to view on Amazon) to the Goal Zero Yeti 1000 (click to see the latest version on Amazon).

Capable of up to 360 watts depending on whether you’re using PWM/MPPT and which Yeti power station you have.

The only one I would consider using with a Yeti power station is the Nomad 100 panel (click to view on Amazon) that can output 100 watts at most.

Using the smaller ones with a Yeti station won’t be very efficient since they can only output 5, 13, and 20 watts respectively.

A USB port can be found on the three smaller models. It’s a somewhat disappointing port with 5, 5, and 10 watts max output.

A 5V 1A port will take several hours to recharge a phone. It would also charge a power bank very slow. Nomad Plus panels are more powerful for use with USB.

This makes the Nomad Plus 28 an excellent option for the Sherpa 100AC.

All three models have a USB port, capable of charging devices at max 7, 12, and 12 watts.

Somewhat disappointing that the Plus 28 can’t output more than 12W through USB to fast-charge power banks.

The Nomad 14 Plus is a good choice for charging your phone, GoPro, and tablet with its 12W USB and 14W 8mm output.

In the future, I would like to see solar panels with a USB-C connection for faster charging.

The Boulder panels are Goal Zero’s large solar panels that I recommend using with Yeti power stations or the Sherpa 100AC.

They’re much less portable than the Nomad and Nomad Plus solar panels but are capable of outputting much more power, making them a great choice for stationary campers.

All Boulders except the biggest 200W model have an 8mm solar port.

Goal Zero sells an adapter (click to view on Amazon), but note that even with an adapter, your Yeti or Sherpa 100AC can be limited due to input ratings.

The Best Goal Zero Solar Panel for Each Use

Which panel is best for your setup depends on what you plan on charging it with.

I recommend going with a panel capable of more watts than you need since solar power often falls short of its wattage rating.

The highest I have seen is 80 watts. Consider this when deciding and you’ll be less disappointed.

Most phone batteries aren’t huge, so while the lower end panels with 5W won’t fast-charge your phone, they will do the job.

The Max Watts shown in Table #1 is not USB specific but can be when used with an 8mm cable that supports higher ratings.

Here is what I recommend:

If all you need to charge is your phone, the Nomad 14 Plus (click to view on Amazon) will do a great job and do it quickly.

However, I recommend purchasing a power bank (click to see review) to go with it so you can use your phone during the day and let the solar panel charge up the power bank.

The Nomad 14 Plus will also be a great choice if you need the panel to be foldable and more portable than the Boulder panels.

The 50W panel will charge the Sherpa 100AC from 0 to 100% within hours and then charge your phone and tablet several times.

The Sherpa 100AC could also charge a laptop like a Macbook for at least an hour. For a more portable choice, the foldable Nomad 28 Plus is capable of 28W.

If you have one of the smaller Yeti power stations or the Sherpa 100AC, the Boulder 50 (click to view on Amazon) will do the trick.

If you have the Yeti 400 or bigger, I recommend going with at least a 100W solar panel.

Remember that you can use third-party solar panels with the Yeti power stations, and there are also other options for charging your phone, tablet, and camera with foldable solar panels.

Can I Mount a Goal Zero Solar Panel to the Roof of a Home, Car, Rv Trailer, Van?

Goal Zero sells a mounting bracket kit (click to view on Amazon) for use with their non-briefcase Boulder 50 and 100.

These brackets will let you mount the panel onto the roof.

The Boulder solar panels (click to view on Amazon) are waterproof since they’re designed to be able to install permanently.

The foldable panels are not waterproof but somewhat water-resistant.

You should keep them dry though and not leave them out in the rain.

No, you can use third-party solar panels with the power banks and stations.

No, other power banks and stations can be used with Goal Zero panels if they have one of the cords found on the panel as an input.

For example, power banks that charge through USB can be used with any newer USB source and solar panel.

How to Connect a Goal Zero Solar Panel Directly to a 12v Battery?

If you want to connect a Goal Zero panel directly to a 12V battery, you need to go through a charge controller to not hurt the battery.

With Yeti power stations, these are built-in already, and is why they’re considered plug-and-play.

Goal Zero sells a Guardian 12V Plus Charge Controller (click to view on Amazon) that lets you connect Boulder and most Nomad panels to a 12V battery.

This will regulate the voltage going to your RV/car/van battery and prevent overcharging.

My Goal Zero Solar Panel Doesn’t Work. What Should I Do?

A panel that doesn’t work might need a reset.

This is done by unplugging anything connected to it.

If that doesn’t help, there might be a faulty cell or a damaged connector.

All Goal Zero panels come with a one year warranty, so if you’re having issues within a year of purchase, contact Goal Zero so you can send it in for repair.

What Is the Goal Zero Mini Solar Port?

The Mini Solar Port is a 2mm port that isn’t widely used, even by Goal Zero.

You’ll probably never use it.

Which One Is the Best, 8mm or Anderson Power Pole?

Anderson Power Pole can handle more power and is better in that way.

The only advantage with the 8mm I can think of is the way it connects.

It’s a round connector that is easier to connect than the Anderson Power Pole that has a positive and a negative connector.

Which Solar Panel Cell Type Is the Best?

They’re more efficient in all temperatures and take up less space.

The only negative with monocrystalline panels is the fact that they cost more.

Can I Charge My Yeti Power Station or Sherpa 100ac in the Car?

Goal Zero makes a 12V car charger (click to view on Amazon) for use with Yeti power stations.

The 12V car charger is capable of outputting 60 to 120 watts depending on the amperage chosen on the unit.

Have any more questions about Goal Zero Solar Panels? Leave a comment below.