Power stations, also known as solar generators, have become increasingly popular in the past couple of years. Being able to keep your devices charged and powered when you’re outdoors camping, or when the power goes out at home, has become so easy to do and affordable with a portable lithium power station.

There are power stations in all different sizes, but a very popular size is the ones that have a battery capacity of around 500 watt-hours.

In this post, we’re going to compare three power stations from three of the most popular brands. The Goal Zero Yeti 500X, the Rockpals 500W, and the Jackery Explorer 500.

In addition to the comparison, we will recommend the best compatible solar panels for each power station and how you can connect any solar panel.

As always, please leave a comment if you have any questions and we’ll do our best to help you. 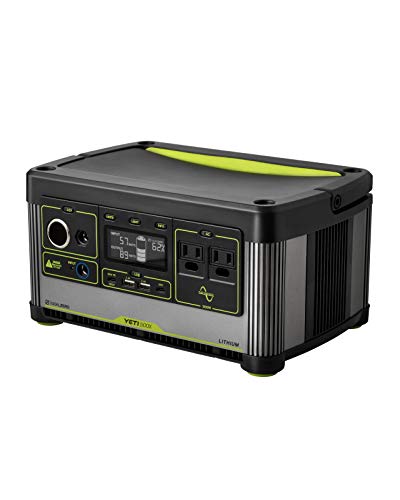 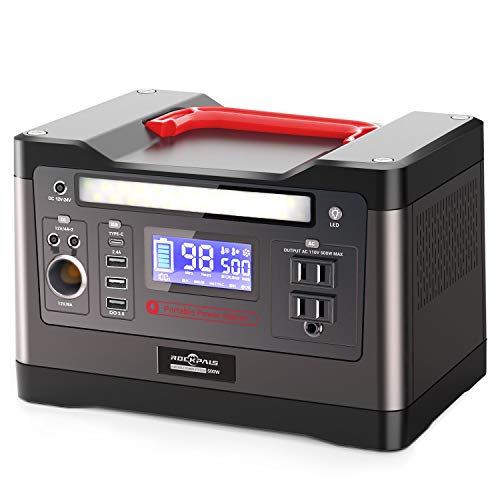 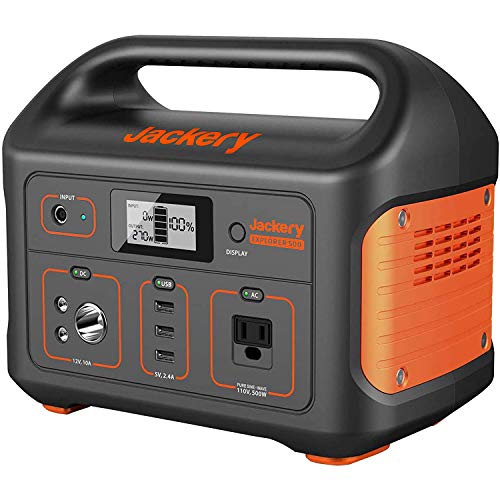 Note: Scroll left/right on small screens to view all products in the table.

A Closer Comparison Of Each Feature

Each of them has a battery capacity above 500 watt-hours, with the Rockpals having the most at 540Wh.

So does it matter? A 50W device uses 50 watt-hours per hour, so with the extra 35 watt-hours you get out of the Rockpals versus the Yeti, a 50W device would run for at least 30 minutes longer.

The inverter rating tells us how powerful the AC outlets are on a power station.

You might’ve noticed in the table that there are two numbers, for example, 300W/1200W surge. The first number (300W) is how much the AC outlet(s) can output continuously, while the second number, also called the surge watts, is how many watts the AC outlet(s) can handle for a short amount of time, usually less than 30 seconds.

Rockpals and Jackery have the same inverter rating, which means that you can power the same devices with both of them. Even though the Rockpals has two AC outlets, they can only output 500W continuously together and not separately.

The Goal Zero Yeti 500X has a weaker inverter with its 300W, although it has a larger surge wattage at 1200W. I don’t recommend relying on the surge watts to power anything, so if you know for a fact that you need between 300-500 watts at all times during use, the Rockpals 500W and Jackery Explorer 500 are the better choices.

Goal Zero and Rockpals have two AC outlets, although only one is grounded on the Rockpals.

All of them have a good number of USB ports, but the Goal Zero has a USB C and USB C PD in addition to its two USB A ports. The USB C PD port is an in/out port that can also be used to charge the Yeti battery with a compatible USB C PD charger like the RAVPower 61W USB C PD wall charger.

All three have a cigarette port and additional DC ports. Two additional ports on the Rockpals and Jackery, and one on the Goal Zero.

The 12V cigarette port is regulated on the Goal Zero and Jackery, but not Rockpals. I’ll talk more about why that matters in a minute.

Goal Zero wins due to the dual USB C ports.

The Goal Zero Yeti 500X and Rockpals 500W have an MPPT solar charge controller. This is better than the PWM controller found in the Jackery.

What it means in day-to-day life is that the Yeti and Rockpals will charge faster and more efficiently than the Jackery when using solar panels. This is especially true when the sun is low on the horizon, like in the morning or evening. It also makes a difference during the winter months when the sun is weaker.

The Goal Zero Yeti can handle 120W of solar input, while the Rockpals maxes out at 83W, and the Jackery at 72W. You might notice that these numbers are different from what the table says, and the reason for this is that Rockpals and Jackery charge faster with the included wall charger, while the Goal Zero charges slower.

The Yeti 500X can handle 12V solar panels rated at up to 22V and the Jackery up to 30V. It’s unknown what the voltage limit of the Rockpals MPPT charge controller is.

If you’re planning on using the power station while it’s charging with solar panels during the day, the Yeti 500X will be the absolute best option since it can handle up to 120W input. I would pair the 500X with two 100W panels to reach that limit during peak sun hours. I’ll talk more about how to do that down in the “solar panel recommendations”-section.

Goal Zero has the best screen since it shows not only input/output watts and the battery percentage, but battery voltage, watt-hours used, amp output, and battery bars. It’s also a backlit display that is easy to read both during the day and night.

Each of these power stations can be charged in several ways. With a wall charger, a car charger, or solar panels. The Goal Zero Yeti 500X can also be charged via USB C PD.

The Yeti 500X can be charged in 3 hours with maximum input (180W from solar and USB C PD). It takes 4.5 hours with the Yeti car charger, and 8.5 hours with the wall charger. If you have two 100W solar panels wired in parallel to max out the 120W solar input, it would take about 4.5 hours.

Jackery takes 9.5 hours with a 100W solar panel, 7.5 with the wall charger, and 16 hours with the included car charger.

Overall, the Goal Zero Yeti is the fastest.

Both Goal Zero and Jackery have a regulated 12V output, the Rockpals does not.

The reason it matters is that a lot of people buy power stations to power 12V fridge/freezers. These appliances often have a built-in feature called low-voltage cut-off, which senses the voltage and shuts off if it’s not receiving the correct voltage.

Therefore, I recommend choosing a power station with a regulated 12V output if you plan on using the 12V cigarette port at all.

Each power station has a built-in handle. The Goal Zero and Rockpals have a folding handle, while the handle on the Explorer 500 is rigid. Out of the two with a foldable handle, Goal Zero’s handle is more rigid and well-made.

The Rockpals is the most lightweight and compact power station overall.

Rockpals includes a wall charger, a car charger, and an MC4 to DC adapter.

Jackery includes a wall charger and a car charger.

I hope I have helped you understand the differences between these three power stations, and that it has made it easier for you to decide which one fits your needs.

They’re all good in their own way, and I recommend all three.

Here is how they scored based on the rankings:

Here are a couple of scenarios/needs and recommendations, if you still can’t make up your mind, please leave a comment with your needs and I will help you choose.

Fulltime RVer/vanlifer that wants to power phones, tablets, TV, laptops, lights and fans + recharge with solar panels: The Goal Zero Yeti 500X is the power station I would go with as a full-time traveler. The biggest reason for that is the charging speed and solar capabilities. I need to be able to use my laptop all day long and charge the battery at the same time, so I need to be able to quickly recharge the battery with solar panels. The Rockpals is also acceptable, but the Jackery charges too slow with solar with its 72W max solar input.

A weekend camper that needs to power CPAP, TV, phone, tablet, lights + recharge at home: Either the Goal Zero Yeti 500X or Jackery Explorer 500 would do. I do recommend using a regulated 12V output with a CPAP machine, and while Rockpals sells DC converters for CPAP machines, I would go with one of the other two.

For the homeowner that needs backup power for emergencies + recharge with wall charger/solar: The Goal Zero Yeti 500X or the Rockpals 500W. If you don’t need a regulated 12V cigarette port and want more battery capacity and a more powerful inverter, the Rockpals will be the best and offer a little bit of everything with USB C, MPPT charge controller, and two outlets in a portable package.

Tent/car/van campers that need to charge/power a phone, tablet, camera, lights, laptop, 12V fridge + recharge at home/solar: The Jackery Explorer 500 has a mix of features that makes it a great power station for somebody that only needs to power their devices for a weekend. Paired with a solar panel, it will recharge enough during the day to be able to keep a 12V fridge running, but for longer trips, the Yeti would be better. The Rockpals is out of the picture due to the non-regulated 12V port.

Since it has an 8mm port, there are a lot of compatible solar panels on the market. Goal Zero sells its own, like the Boulder 100 and Boulder 200. Note that the Boulder 200 requires an Anderson to 8mm adapter. For 8mm extension cables, I recommend these.

To max out the 120W solar input, you can connect two 100W panels together in parallel with an MC4 Y Branch.

To max out the 83W solar input, you can connect two 100W panels together in parallel with an MC4 Y Branch.

Jackery makes its own solar panels, the SolarSaga 60W, and SolarSaga 100W.

Like with the other two power stations, you can connect two 100W panels together in parallel with an MC4 Y Branch. It would only be worth it if you have a lot of cloudy days though since otherwise a single 100W panel will be able to reach the 72W maximum solar input.

How Long Will A Power Station Run My Device?

To figure out how long a specific power station will run a specific device we need two numbers: the total battery capacity, and the wattage required by the device.

We also need to know that an inverter is not 100% efficient, but usually about 85% efficient.

Now, let’s say we have a 500 watt-hour power station and need to power a 60W device.

We’ll start by calculating the runtime before counting in inverter efficiency: 500/60=8.33

So our 60W device will run for about 7 hours with a 500Wh power station. Take these numbers with a grain of salt, some power stations are configured to only output about 90% of it’s rated capacity to make the battery last longer, and some inverters are more efficient than others.

If you don’t know how many watts your device requires, look on the device itself or its power brick. I use a Kill A Watt to find out how many watts a specific device uses.

What Is A Watt-Hour?

A watt-hour is a unit of energy. A device that requires 50W, uses 50 watt-hours per hour.

Portable power station manufacturers like to advertise the battery capacity in watt-hours instead of amp-hours because it’s a larger number that sounds better. It is an easy way to understand capacities and power consumption though.

What Devices Can Be Powered By A 500W Power Station?

Please leave a comment down below if you have any questions about this article or portable power stations in general.