Disclaimer: The Innocn portable monitor was sent to us to be reviewed and tested. This is our honest review and opinion of this product after testing and using it.

How Good Is The Innocn 4K Oled Touchscreen Portable Monitor?

Portable monitors have become increasingly popular in the last couple of years.

Not only are there more people working remotely looking for portability, but they have become a lot more affordable.

A couple of weeks ago, I reviewed the Innocn 1080p 15.6″ portable monitor, which is one of Innocn’s entry-level portable monitors. Today I am reviewing its big brother, the PU15-PRE. 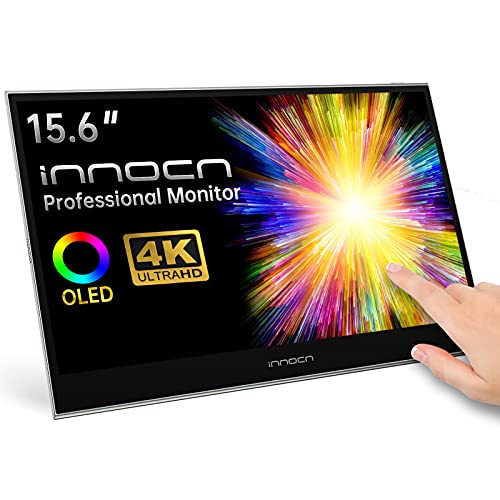 Innocn gave us this coupon code to share with our readers for 15% off the PU15-PRE: INCMT15RE

With a model number like PU15-PRE it might not sound like something special, but as soon as you take a look at the features and the picture this display produces, I think you’ll be impressed.

Let’s get right to the specifications and features, then I will talk about what I like and don’t like.

Table of Contents show
How Good Is The Innocn 4K Oled Touchscreen Portable Monitor?
Innocn 4K OLED (PU15-PRE) Portable Monitor – Specifications
Features
What I Like
What I Don’t Like
Conclusion
Frequently Asked Questions
What devices is it compatible with?
Can you use it with a stylus?
Does it work with both Windows and Mac? 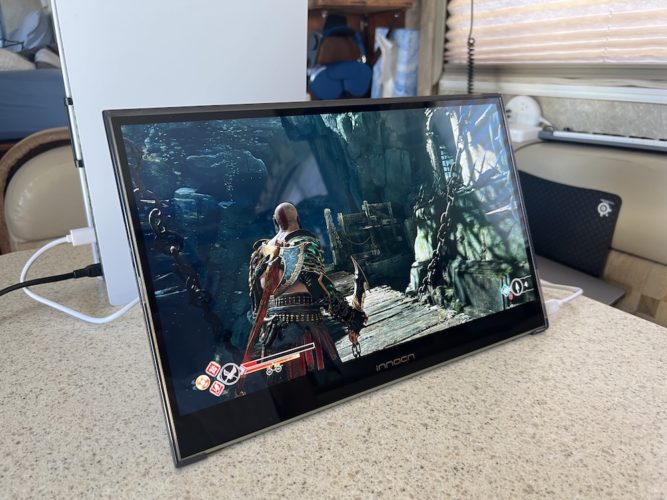 Its max brightness is 400 nits, which can make it hard to see outdoors. It’s not unusable, but I don’t recommend using it in direct sunlight.

Since it’s a touchscreen, you don’t need to use a mouse with whatever you have connected to it. This works both on Windows and Mac.

There are two USB C ports and one Mini HDMI port.

The USB C ports are used for power and/or for plugging in devices.

Even though it’s a Mini HDMI port, it can be used with regular sized HDMI ports since Innocn includes a full-size HDMI to Mini HDMI cable.

There are three buttons, one on the side and two on the top.

The top buttons are used to control the settings, which can also be changed with touch. The single button on the side is the power button, which also has a small LED indicator by it.

A 5000 mAh battery is built-in so you can use the display without plugging it in to power.

When the battery runs out, you need to plug in a USB C cable to both power the display and to charge the battery.

There are two built-in speakers that can be useful if you’re playing games or watching movies.

Don’t expect any extraordinary sound out of these speakers though.

The included smart case works not only as a way to protect the monitor while not in use, but as a stand as well.

It’s easy to setup and put away, and protects both the front and back when folded together.

I can’t say enough good things about the display. While OLED has its downsides, like relatively low brightness, what you trade it for is extremely vivid colors and true black levels.

Not only that, but putting a 4K OLED display in a 15.6″ form factor results in a very sharp picture.

I took this picture comparing it to my MacBook Air that has a 2k retina display. The Innocn is on the left, MacBook on the right.

You might think that the camera exaggerates the differences and that the MacBook Air display doesn’t look that washed out in person, but that’s exactly how it looked to my eyes.

As somebody that appreciates great picture quality, I am still being impressed every day with how good the screen looks when just doing daily tasks.

Browsing the web becomes more enjoyable, watching 4K videos on YouTube is a pleasure, and to top it off it’s a touchscreen so you can do simple things like navigating the web with the tip of your fingers.

While it’s not a large battery, it’s enough to power the monitor if you’re on the go without access to power.

With my MacBook Pro, I can pack my laptop, the monitor, and one USB C cable and go setup a dual display workspace wherever I want to.

On average, the battery lasted about 2-4 hours depending on how high I would set the brightness.

It’s a simple but smart case.

When I first got it I thought I wasn’t going to like the case since it took a second to figure out how to set it up to use the stand.

I buy cases and screen protectors for all of my devices that can possibly use it, but with this monitor I don’t feel the need to.

The case protects the display, front and back, and I am not worried about it being scratched or damaged in my backpack.

There are no major things I dislike about this product, but there are a couple of small issues, or things you should be aware of before buying it.

For my use, the PU15-PRE is an almost perfect product.

Innocn gave us this coupon code to share with our readers for 15% off the PU15-PRE: INCMT15RE

The picture quality is hard to beat, but it’s even harder to go back to a 1080p LCD screen after using a 4K OLED screen.

The smart case is actually smart, and the way it goes from protecting the screen to being a full fledged stand in a matter of seconds is great.

Last but not least, the built-in battery makes it possible to bring the display to the library or the park and work for a couple of hours even if you don’t have access to power.

But just like with all electronics, there are a couple of cons. If you plan on using it on battery power or use the touch functionalities often, the dislikes I mentioned above might become more and more frustrating.

However, if you are looking for a portable 4K OLED monitor that looks incredible, is extremely thin, and can be setup and put away quickly, this is the one.

What devices is it compatible with?

Any device that has an HDMI output or can output via USB C.

I have tested and used it with my MacBook Air and Pro, Windows 10 gaming laptop, Nintendo Switch, PlayStation 5, iPad Pro, and Apple TV.

Can you use it with a stylus?

Yes, but I didn’t have one to test it with. It does not work with the Apple Pencil.

Does it work with both Windows and Mac?

Yes, even the touch functionalities. Mac is not as friendly to touchscreens as Windows, but it worked fine for simple web browsing and card games.