Disclaimer: This product was sent to us for free, in exchange for a review. We were not paid by Jackery to do this review but we did receive it for free. All opinions expressed in this post are based on our personal views and experiences.

Is The Jackery Explorer 1500 Perfect For RVing & Camping?

Jackery is a popular company that isn’t new to the power station market. If you’ve ever done any research about solar generators, Jackery is most certainly a company name you’ve come across.

Not only did they get into the market early, but they did it with products that had what people were looking for – portable electricity in a compact package.

Last year, I reviewed the Explorer 500 which is one of Jackery’s most sold products. And earlier this year, I pushed the Explorer 1000 to its limits.

This time, I am taking a look at the new Explorer 1500. It’s not the largest model since there is also an Explorer 2000 which is like a 1500 with more battery capacity. 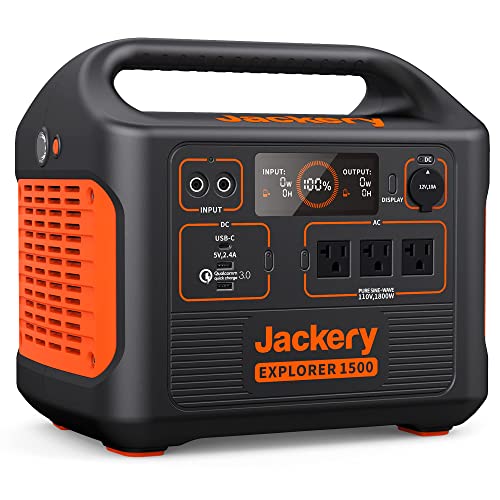 Before we get started, I want you to be aware that there are two different versions of the 1500. If you purchased one earlier this year you probably have the first model. I am reviewing the updated model.

So how do you know which one you have? Well, the new model that I am reviewing has a battery capacity of 1534 watt-hours.

The older model has 1488 watt-hours. You can find this number in the manual and underneath the power station.

In addition to the larger battery in the latest model, there are some differences when it comes to the included solar adapters and the built-in charge controller.

I’m going to do my best to explain this further down in the post, but please leave a comment if you have any questions.

Without further ado, let’s start by taking a look at its features and then what we think is great and not so great.

The battery capacity tells us how much electricity the batteries inside of the power station can store.

With 1534 watt-hours, you will be able to power a 50W TV for about 26 hours if you consider the inverter efficiency (85% efficient).

A device that requires 1500W would stay powered for a little under an hour with a fully charged Explorer 1500.

One of the best things about the Explorer 1500 is the powerful inverter. It’s a pure sine wave inverter capable of outputting up to 1800W. That’s 15A, which is how powerful a regular outlet in a home is.

The inverter is turned on by pressing the button next to the AC outlets. You’ll hear the fans kick on, and that is needed to keep the inverter cool.

There are a lot of ports, and you can use all of them at the same time.

Since the 12V port is regulated, it’s safe to use with 12V fridge/freezers and other similar appliances/devices.

One of the USB A ports supports QC3.0, meaning that it can do up to 18W, while the second one maxes out at 12W. The USB C PD port is only an output, but it can deliver up to 60W to compatible devices.

All of the older Jackery power stations have had the same display for years. This model has finally gotten an upgrade that shows not only the battery percentage, input and output watts, but also hours to full/empty.

The calculation is based on the current state of charge and the current input/output, so the number will increase or decrease significantly depending on how you’re charging it, and what you have plugged in.

It also shows which ports are active and how the battery is being charged.

When the battery reaches 20% and 10%, the screen flashes to let you know that the battery is running low. To decrease the wear on the batteries, it’s a good habit to charge the battery whenever this happens.

The Explorer 1500 can be charged in several ways. With the included wall or car charger, and with solar panels. You can use two chargers at the same time, since there are two inputs.

There are no solar panels included, but Jackery does include two parallel adapters with the newer 1500 model. The first gen 1500 came with series adapters.

There are two 8mm inputs that can be used at the same time. These are proprietary 8mm connectors and can not be used with 8mm connectors made by other companies.

There is, however, an adapter that makes it compatible with other types of 8mm connectors. Click here to view the SolarEnz adapter on Amazon.

Just like with the old Explorers, the MPPT charge controller allows voltages between 12-30V, which means that you have to connect panels in parallel and not in series.

There is a flashlight on the side of the unit that is controlled with a button.

Jackery includes a wall charger, a car charger, and two 8mm parallel adapters. There is also a robust storage case in the box that holds all the cables.

My Review Of The Jackery Explorer 1500

Jackery has done a great job fitting a lot of battery capacity in a portable package with the Explorer 1500.

As full-time travelers that camp in the wild without hookups, having enough juice to make it through a couple of cloudy days can be tricky since we rely on the sun to recharge our batteries.

With 1534 watt-hours, we will be able to make it at least two days without sunshine. How long you’re going to last depends on how much electricity you use.

We are two people working full-time online, which means we have to charge our laptops and keep our cellphone signal booster turned on in most places.

Even though most don’t necessarily need it, having access to a 15A outlet (1800W) is neat. It means we can keep our laptops plugged in while also heat food in the microwave.

We plug our Class C RV into the Explorer 1500 and it powers the outlets, charges the batteries, and runs our kitchen appliances like the microwave, air fryer, toaster, etc.

We pulled an extension cord from the power cord on the outside to inside our RV. So now we can control and monitor the Explorer as much as we need to.

Remember that even though you’re using a 30A or 50A cord, you’re only going to be able to pull 15A out of the Jackery at most.

You’re not going to be able to run an RV AC, but if you absolutely need to you could run a space heater on high for about an hour. We can run things like our microwave (1200W) air fryer (1300W) though.

It’s not worth it to run the RV refrigerator with the Jackery, since it would drain the battery completely in less than a day. 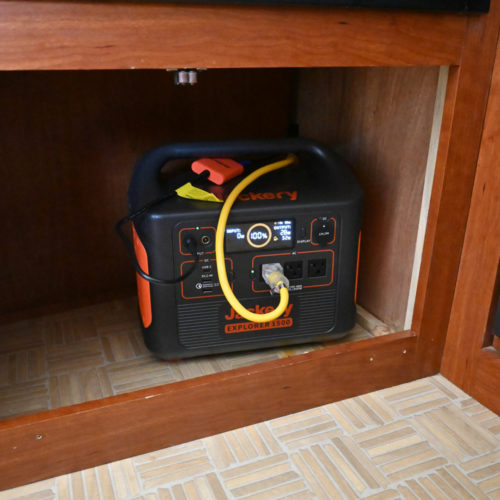 There is only one negative thing about an inverter, and that’s the fans that turn on to prevent it from overheating.

It might bothersome, especially since it doesn’t take a lot for it to start spinning. However, compared to a gas generator it’s very quiet.

The built-in solar charge controller is an MPPT type controller. It’s almost the standard nowadays, but it’s still worth mentioning.

MPPT is more efficient and will charge the batteries faster than a PWM charge controller found in cheaper solar generators.

The Number Of Ports

I have complained to Jackery before about the lack of ports on its power stations. I especially had a tough time with the Explorer 500, and the Explorer 1500 did get some improvements.

The Explorer 1500 is very similar to the Explorer 1000 in terms of ports, but there have been a couple of changes. 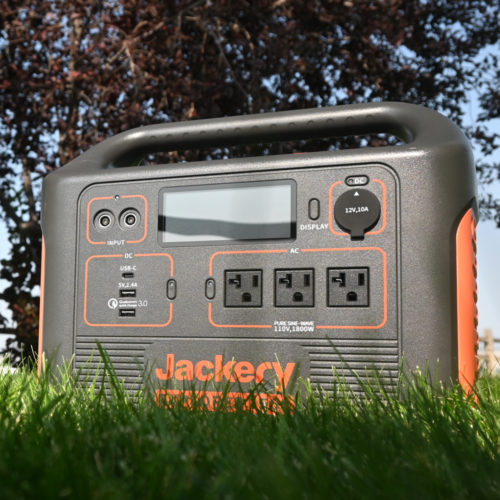 You only get one USB C instead of two, but it’s a more powerful one that can output up to 60W compared to the 15W on the Explorer 1000.

The inputs have also been changed. There are two proprietary 8mm inputs, instead of a regular 8mm and Anderson power pole input.

One good thing about the inputs is that both can be used at the same time. On the 1000, you could only use one input at a time.

A regulated 12V port is a necessity if you plan on using 12V appliances like a fridge/freezer. The reason for that is that these types of appliances often have a low-voltage cut-off feature, that prevents the appliance from running a low voltage.

It is larger and heavier than the Explorer 500 and 1000 (for obvious reasons), but it’s still portable and light for the power it packs.

Weighing in at almost 36 pounds, it might be a little bit too heavy for some, but the large built-in handle on top makes it easy to grab with one or two hands.

Not all companies include solar adapters and a car charger. I do wish Jackery would include an MC4 to 8mm adapter, but at least they gave us two parallel adapters so you can hook up third-party panels.

The 8mm connector has been used on power stations for years, but for some reason, Jackery decided to make a small adjustment and change the center pin so you can’t use the regular 8mm connectors.

Jackery does include two parallel adapters which use the “old” 8mm connectors, which means you can use third-party solar panels still, but why force users to use your adapters?

Update: SolarEnz has released an adapter that lets you connect the 8mm connector used by other companies to the Explorer 1500, click here to view it on Amazon. 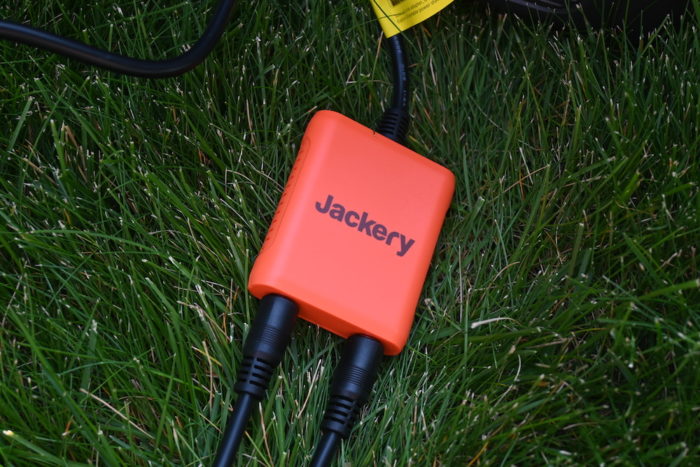 A power station this big should have WiFi features so you can control and monitor it with your smartphone. We have seen other companies like Goal Zero and Ecoflow do this and it’s about time Jackery joins them.

Since it’s not a USB C PD port capable of both input and output, the USB C port can only be used to charge devices, but not to charge the Jackery battery.

Sometimes it’s easier to come by a USB C charger than a wall, car, or solar charger, so it would’ve been great if it supported input as well.

Jackery has long been the king of affordable solar generators. That doesn’t necessarily mean they’re making the best products on the market.

They do know what most people are looking for and they know how to market a product.

The Explorer 1500 feels like a typical Jackery product. It does the job, but it doesn’t stick out with any impressive groundbreaking features.

The decision to make a proprietary 8mm connector was a step in the wrong direction, and I hope they return to the standard one in the next model.

Overall, the Explorer 1500 is a reliable power station that is great for full-time travelers or homeowners.

With a powerful inverter, a relatively big selection of ports, and 1534 watt-hours of battery capacity it’s going to do the job for most people.

Please leave a comment down below if you have any questions about the Explorer 1500.