Disclaimer: This product was sent to us for free, in exchange for a review. We were not paid by Maxoak to do this review but we did receive it for free. All opinions expressed in this post are based on our personal views and experiences.

The Maxoak AC10 is a portable power bank with a 99 watt-hour battery capacity.

Why exactly 99Wh? Well, because TSA has a limit of how big of a battery you can bring on a flight, and that limit is 100Wh.

Since the AC10 is 99Wh, it can be brought on a plane and power your devices throughout the flight. 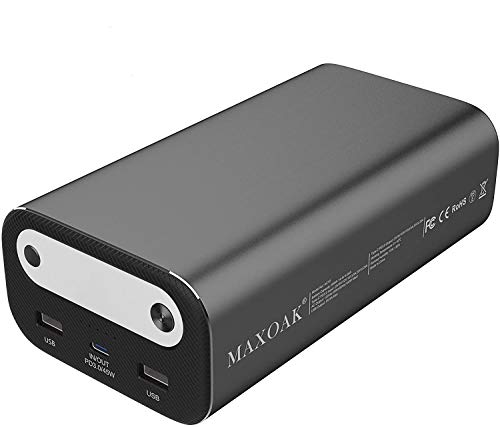 USE COUPON CODE: bluetti10 FOR 12% OFF YOUR PURCHASE!

Today we’re going to review the AC10. What can it do, how good is it, and should you buy one?

We’ll go through each feature of this portable power bank, then talk about what we like and don’t like, and end with not only our tests but also a FAQ with questions you might have.

As always, if you have any questions feel free to leave a comment, and you can use the table of contents to navigate the post.

Now, let’s start by looking at the features of the Maxoak AC10.

Table of Contents show
Review Of The Maxoak AC10/99Wh Portable Power Bank For Travel And Camping
Maxoak AC10/99Wh/26756mAh Portable Power Bank
Features
What I Like
What I Don’t Like
Test Results
Frequently Asked Questions
Can You Recharge The AC10 With A Solar Panel?
How Long Does It Take To Recharge?
Can You Use The Battery While It’s Charging?
Is This A Good Power Bank For CPAP Machines?

The Maxoak AC10 has a battery capacity of 99 watt-hours or 26756mAh. That’s the largest lithium battery size you’re allowed to bring on an airplane in the United States.

With 99 watt-hours, you can charge a 10W device for about 10 hours. My Macbook 16 inch has a 99Wh battery, so it would be like bringing a whole extra battery for my laptop.

Most laptops don’t have a battery that large though, so it will recharge most laptops at least once.

My phone (iPhone 11) has a 3,110mAh battery, which means that the AC10 can charge my phone from empty to full at least 8 times.

To figure out how long the AC10 can power or charge a specific device, you need to know how many watts it requires, then divide the required wattage with the total battery capacity (wh). For example, 99Wh/30W=3.3 hours.

There is a small inverter in the AC10 that lets you plug in regular AC devices directly into the power bank. It’s a modified sine wave inverter, but it still powers most devices just fine.

This little inverter can output up to 100 watts continuously, with a peak watt of 140 for a very short amount of time.

Maxoak has only put one AC outlet on the AC10, but if you would like to have another outlet, you can use a power strip.

Since it can only output 100W continuously, you need to make sure that your devices won’t use a total of over 100W, or the overload protection will kick in and shut off the inverter. It doesn’t hurt it though, since all it takes is a restart.

So the inverter powers the AC outlet, but what else is there?

There are two USB ports that can output up to 15W. Last but not least there is a USB C PD port that is both an input and an output. This PD port can handle up to 45W in/out. This is where you plug in the USB C PD wall charger that Maxoak includes.

The USB C PD port is a great port not only because it can handle both input and output, but because there are a lot of devices nowadays that use the USB C port.

Not having to use a proprietary charger to charge each one of these devices is awesome.

Maxoak includes a 30W USB C PD charger that will charge the AC10 in less than four hours.

You can also charge the AC10 with solar panels if the panel has a USB port.

Either USB A or USB C. USB A is usually not nearly as fast as USB C.

I recommend using a panel with a USB C port, like the Paxcess 120W (click to view on Amazon).

How fast it will charge will depend on how fast the USB C port on the panel is.

There are five small LED lights that show the battery level. One light is 20%, two 40%, and so on. When the battery is charging, you can see how charged it is by how many lights light up.

To turn the power bank on, you push the power button once. That will turn on the USB ports. Pushing the button again turns on the inverter and the AC outlet on the opposite side of the USB ports.

To turn all of the ports off, you hold the power button for two seconds and then let it go.

In addition to the ports, there is also a built-in flashlight with three modes – low, high, and flashing. The flashlight is controlled by its own separate button.

Although I would’ve liked to see another USB C PD port or a separate port for charging, I like that there is one AC outlet, two USB A ports, and a USB C PD on this power bank.

The fact that the USB C PD port is both an input and output is great, so you can keep a USB C cable plugged in not only to charge your different devices but also the battery itself.

It’s easy to check the battery level since the battery indicator lights stay lit the whole time the power bank is on.

Some power banks can’t be used while they’re charging, but the AC10 can. You can use both the USB and the AC port while charging it via the USB C PD port.

The AC10 has an inverter, but it’s a small modified sine wave inverter, so it doesn’t require any fans.

Having 99 watt-hours in a portable power bank means that you can charge phones and tablets several times before the bank needs to recharge.

Since it’s the biggest power bank you can bring on a plane, it’s the perfect battery to bring traveling.

Even though the wall charger could’ve been faster (it’s a 30W charger) at least it’s included. I’ve seen similar power banks that don’t include a fast charger, which adds to the total cost.

I also like that Maxoak includes a bag. It’s a soft bag though, so it won’t protect the power bank from much except for scratches, dirt, and dust.

Some see the built-in flashlight as useless, and I understand why. It has a very special purpose, in my eyes, and that is if you’re tent camping or car camping and don’t want to have to carry an extra flashlight.

It doesn’t take up much space, so I like that it’s there.

I don’t like batteries that don’t tell me their exact percentage, that’s just how I am. Even though there are five LED lights that show me in 20% increments, it’s not enough.

If this power bank had a small screen that showed the battery percentage, it would be a much more useful battery to me, and my overall experience with it would be better.

When I plug my MacBook Pro charger into the AC outlet, it starts making a weird noise that doesn’t sound healthy to the charger, so now I just plug the USB C PD cable in instead.

It’s a 45W in/out port, but it should be 60W or even 100W. Also, the included charger is only 30W, why not make include a 45W charger so the battery can be charged much faster since it supports it?

This is mostly a portable power bank for travelers, so a couple of dust covers would’ve been nice.

You can use the included bag to protect it from dust and dirt, but I still would’ve liked to see some dust covers on the port.

Another Way To Charge Would’ve Been Great

Here are a couple of things that I successfully powered with the Maxoak AC10 (each device was tested on its own):

Nintendo Switch (15W) – Used a bar every hour while gaming.

I tested the limits of the inverter and was able to pull 98W for a long period of time without any issues.

I tried overloading the inverter, and the overload protection saw it and turned off the inverter.

It took a little over 3.5 hours to recharge the power bank from empty to full.

It also accepted a charge from a 5V, 2.4A USB A port, but that took about 10 hours from empty to full.

Can You Recharge The AC10 With A Solar Panel?

If your solar panel has a USB C port or you have a USB A to USB C cable, then yes you can.

How Long Does It Take To Recharge?

It takes about 3.5 hours to recharge the battery with the included wall charger. If you have a 45W wall charger it will charge faster than that.

Can You Use The Battery While It’s Charging?

Yes, but you can’t use the USB C PD port since it will be occupied by the charging cable.

Is This A Good Power Bank For CPAP Machines?

I wouldn’t buy something this small with a modified sine wave inverter for a CPAP machine, I recommend at least a Jackery Explorer 300 (click to view on Amazon) for that purpose.

Please leave a comment down below if you have any more questions about the Maxoak AC10.