(Odec has updated this portable power bank, I’ve linked to the latest version in this review.)

The Odec 20W (OD-B5) portable power bank is a new portable battery that can quickly charge devices via both USB A and USB C. 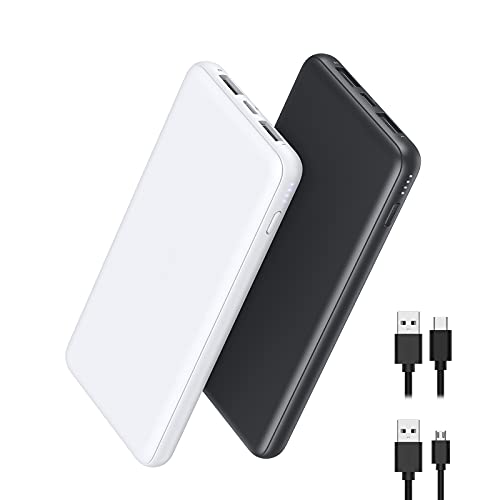 In this post, we’re going to take a closer look at the features, what makes it stick out when compared to other power banks, and our thoughts about it.

The lithium polymer batteries inside the power bank have a total capacity of 20,000mAh, or 74Wh (watt-hours).

That’s below the TSA limit, so you can bring the Odec 20W onto an airplane.

What makes it different from a lot of other portable power banks is the 20W USB C PD port that can be used to both charge the battery itself and compatible devices.

Meaning that it’s both an input and an output.

When used with a USB C PD power brick of at least 20W, the battery can be recharged fully in less than six hours.

If you have a solar panel with a USB C port, you can also recharge the battery off-grid while camping or backpacking.

In addition to the USB C PD port, there are two USB A ports that support 3.0 quick-charging. QC3.0 only works with compatible devices.

You can use all of the ports at the same time. Odec doesn’t recommend charging devices while recharging the battery, but it’s capable of it.

There is only one button on the side of the battery, which is used to check the battery level. Four tiny LED lights indicate whether the battery is at 25, 50, 75, or 100 percent.

Odec includes a 4 ft USB TO USB C cable and a manual.

Note that a USB C PD charger is not included.

Our Review of Odec 20W

The power bank feels and looks great. It has a high-quality feel to it and the texture on top makes it stick out when compared to my other portable power banks. 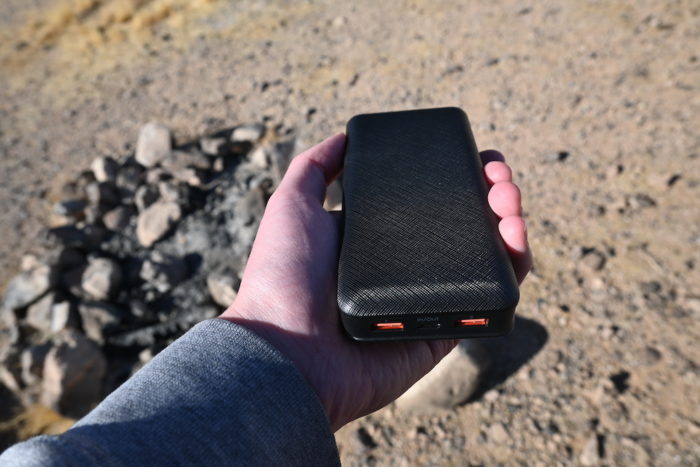 The port connectors are also high-quality, and it’s easy to connect and disconnect cables.

I have had similar power banks with a more rough connection that is frustrating to use, but that’s not the case with the Odec.

After using the Odec for about two weeks out camping it still looks great and it doesn’t scratch easily.

With three ports, you can charge several devices at the same time.

It’s also great that you can choose between the older USB A and USB C. The fact that the USB C port is a PD port makes it even better.

The ports perform great. I was able to charge my iPhone quickly, and an iPad at the same time.

Sure, another USB C port would’ve been nice so you can charge it and use it at the same time, but Odec doesn’t recommend doing so anyway to make the battery last longer.

A good USB C PD port can handle both in and output, and this one does. This also means that you can use a portable solar panel with USB C to charge the battery.

No Charger Included (Except For Cable)

Odec doesn’t include a USB C PD power adapter, so that’s something you’re going to have to buy if you don’t have one already.

The Odec 20W power bank is neither the best nor the worst power bank on the market.

If you buy it, it’s because you’d like to be able to quickly charge a device via USB C PD.

If you don’t need the USB C PD port, there are cheaper options out there for you.

Remember that if you don’t have a USB C PD wall charger, that’s going to be an extra cost, since you need one to charge this battery relatively quickly.

Can You Bring The Odec 20W On An Airplane?

Yes, since the battery is 74Wh and below 99Wh, you can bring the power bank onto an airplane.

Note that this is according to the TSA rules in the United States.

If you’re flying to or from a different continent, different rules might apply.

Is It A Good Power Bank For The Oculus Quest 1/2?

Yes, I would say so. It charges the Oculus Quest at about the same speed as the wall charger that Oculus ships with the Quest.

Is The Power Bank Waterproof?

No, the Odec 20W is not waterproof.

How Fast Can The Odec 20W Charge An iPhone?

If you have one of the latest iPhones that support quick-charging, you can charge up to 50% in 30 minutes.

You’re going to need a USB A to USB C cable since you need to use the USB C PD port on the power bank.

Can You Recharge the Odec 20W With Solar?

If your solar panel has a USB C port, you can use a USB C to USB C cable to recharge the battery with solar.