Disclaimer: Power Queen sent this product to us for a review. That does not affect our opinion about the product, in this article we list both what we like and dislike. Read more about this here.

Personally I use these type of batteries to make my own power stations, but it also makes a great upgrade for RV campers.

You do need to make sure the converter charger in your RV supports lithium. If it does it’s a drop-in replacement.

Is it just like every other 100Ah Lithium batteries?

In a lot of ways, yes. What makes this battery different from the others is the button between the terminals.

It’s basically a power button that lights up to give you an indication of how the battery is doing.

I’ll explain how it works down below, so let’s get right to the specifications.

Table of Contents show
The Smart Power Queen 100Ah Battery Has One Feature Most Other Batteries Don’t
Power Queen 12V 100Ah Smart LiFePO4 Battery – Specifications
Battery Cells
Ratings – Ampere hours (amp hours) and watt-hours
Safety features with built-in BMS
Cycle life
Expandability
Design and what’s included
Size and weight
Review And Test Results
What I Like
What I Don’t Like
Frequently Asked Questions
Is it a drop-in replacement for my RV battery?
What inverter do you recommend?
How do I charge the battery?
How do I charge it with solar panels?

Power queen uses lithium iron phosphate (LiFePO4) cells in most of its batteries.

While these type of batteries are heavier than the more common li-ion, they’re more durable and you’ll get more cycles out of them.

To test the battery voltage with a multimeter, you can put the positive and negative probe on the corresponding terminal. 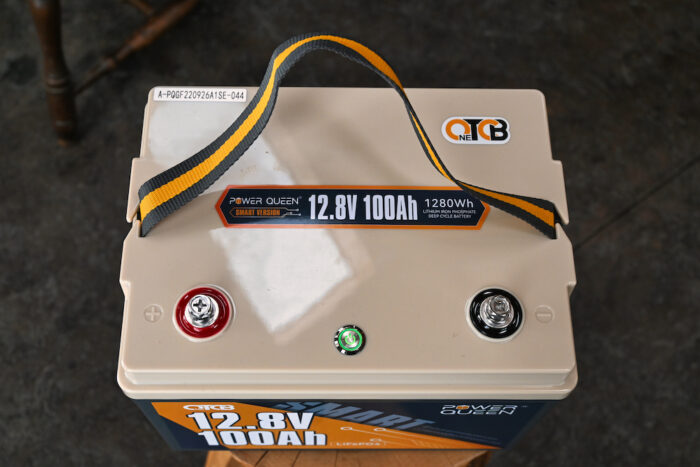 Power Queen recommends waiting 30 minutes after disconnecting all connections to the battery, before checking the voltage.

The recommended charging/discharging temperatures are as follows:

I strongly recommend following these temperatures as much as you can to not risk damaging the cells permanently.

The max continuous charge and discharge current is 100Ah, so you can technically pull the full 1280W and drain the battery within an hour.

One thing to note about that is that even though it’s a 100Ah battery and the max discharge current is 100Ah, does not mean that it will last exactly an hour when doing so.

I recommend reading about Pekuert’s formula if you would like to learn what kind of calculations you can do to get a better estimate of run time with a specific discharge current.

The operating voltage of the battery is 12.8V, and the charging voltage 14.4V.

The SOC (state of charge) can be can be roughly estimated by the resting voltage, the numbers below are from the manual.

One feature I haven’t seen on any other lithium battery, related to the BMS, is the button on top between the terminals.

This button can be used to not only turn on and off the battery, but to see what the status is.

With the LED light in the button, you’ll quickly know if there is something wrong with the battery or the BMS.

I don’t recommend doing this unless you know what you’re doing. Charging lithium batteries in freezing temperatures can cause permanent damage to the cells.

After 5000 complete discharge cycles or after 12 years, the button might start blinking orange. Power Queen recommends replacing the battery at this point, but it’s not necessary.

You can still charge and discharge the battery as normal.

The battery supports both parallel and series connections.

You can theoretically connect up to 16 identical batteries together for a 4P4S setup. This means that there are four pairs of parallel and four pairs of series.

It’s important that you use wiring and terminals that can handle the total voltage and amperage of the combined batteries.

The included manual has more important information about these configurations.

There is a strap handle on top that makes it easy to carry and transport the battery. 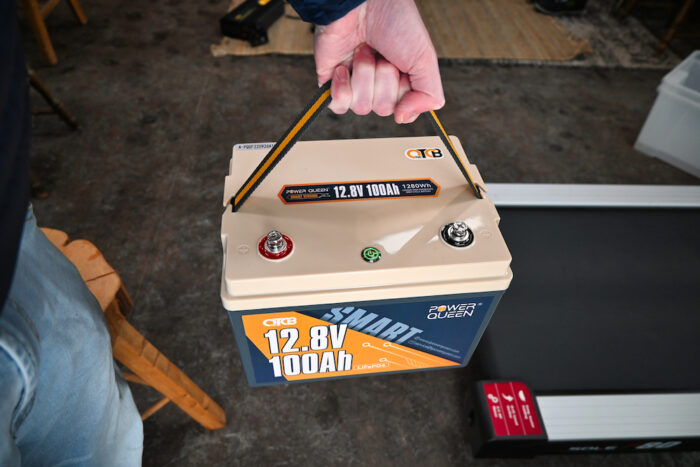 On top is also where you’ll find the two terminals, one positive and one negative. The power and status button is located between the terminals.

Large capacity for the money

Power Queen currently sells this battery for $459.99. For the amp hours and features you get, that’s a good deal.

Is it the best deal? Well, that’s not for me to say since it’s going to depend on whether you think the smart-features are worth it or not.

I did not have any problems pulling 1300W for an extended period of time from this battery.

It would turn off at anything above 1350W after a while, so if you need to be able to power a device that requires more than that you’re going to need two batteries wired in parallel.

I was also able to pull the full 100Ah from this battery, it actually ended up being a couple of amps more than what it’s rated at.

I like the button that functions as more than just a power button.

If you don’t have a battery meter or multimeter nearby, the lit button is an easy way to know if the battery is functioning as it should or not.

I also like that the BMS has low-temperature protection. If you replace your RV battery with this and spend time in cold climates, this is an important feature to prevent damage.

I did test the low-temperature protection in a garage where the temperature was close 20°F (I don’t recommend doing) and it kicked right in and prevented me from charging the battery even a little bit.

My 100Ah 12V AGM battery in my RV weighs 68 pounds, this battery weighs 24.25 pounds. That’s a huge difference, and makes it so much easier to deal with.

Li-ion batteries are great, but LiFePO4 is arguably better.

They’re safer, last longer in terms of lifecycles, and can hold a charge a bit longer than Li-Ion.

But it’s when you compare them to lead-acid that you’ll start asking why lithium isn’t used everywhere.

It might seem like a high upfront cost, but over time it’s going to save you money compared to lead-acid if used regularly.

First I want to mention that Power Queen does make a self-heating 100Ah 12V battery, but it does not have the power button.

The model I reviewed does not though, and that’s a limitation that will not be a problem for most people, but a dealbreaker for some.

In fairness most lithium batteries do not have self-heating capabilities, but I hope to see it become the standard.

The charging/discharge temperature limitation is simply a downside with lithium in general.

Is it a drop-in replacement for my RV battery?

It might be, if the converter charger in your RV supports lithium.

I suggest reading the owners manual to find out what type of batteries the converter charger in your specific RV/camper supports.

You also need to know how to wire the battery to your RV correctly.

If you’re using 6V batteries today, they’re most likely wired in series before they’re connected to your RV.

With two 12V batteries, you need to connect them in parallel for a 12V system.

What inverter do you recommend?

An inverter changes the DC battery power to AC current, and make it possible to power regular household 120V devices off of the battery.

I recommend at least a 1500W inverter, since the battery is rated for up to 1280W. Lookup the power requirements for the device you want to power to figure out whether the battery or the inverter is going to be powerful enough.

If you would like to double the maximum continuous output current you can configure two batteries together in parallel.

By doing this, the amperages will add up but the voltage will stay the same.

How do I charge the battery?

Battery charger – Power Queen sells a 24A LiFePO4 battery charger that can easily be connected and charge up the battery in about five hours.

If you have a battery charger already you need to make sure it supports lithium batteries, since they like to be charged a little bit different than the old lead-acid cells.

As I mentioned earlier, you might be able to replace your current RV battery with this, but you first need to make sure the converter charger supports lithium batteries.

If your RV or camper is a couple of years old and you currently have lead-acid batteries it will most likely not have a converter charger that does support lithium.

How do I charge it with solar panels?

To charge the battery with solar panels you’re going to need a solar charge controller that supports lithium batteries, a solar panel, and some sunshine.

I recommend buying an MPPT solar charge controller like this one I reviewed from BougeRV, and at least 200W of solar panels.

Power Queen recommends 300W, since that should be able to charge up the battery within five hours in optimal conditions.