Which Power Station Is The Best For Your Needs? The Rockpals 300W Or 500W?

Both of them are portable, lightweight, and great portable batteries that can be brought camping or be used at home during power outages.

But how do they compare, and which one is the best for your needs?

Today we’re comparing the two to make the differences more clear than what the names tell us.

If you’re interested in power stations for camping, you should check out my post on the best ones here.

Let’s start by comparing the two on the table, then we’ll go through what the differences mean in practice.

I’ll also share some of my solar panel recommendations for these power stations in case you want to be able to recharge the battery when away from home.

Lastly, I’ll share some of the best alternative power stations to the Rockpals 300W and 500W made by other companies.

Related Product: Recharge your power station with a solar panel. The Twelseavan 120W (click to view on Amazon) is compatible right out of the box with all power stations in this article. 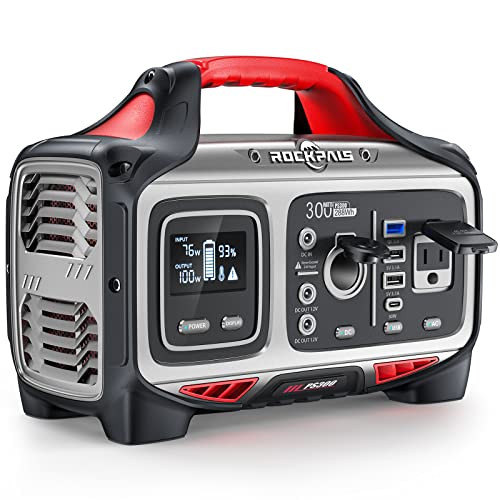 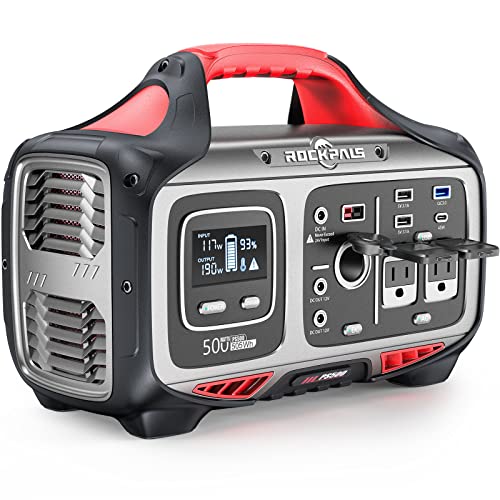 The battery capacity is exactly what it sounds like, how much battery power the power station can store at most.

There is a big difference between the capacity of these two power stations, 280 versus 505 watt-hours.

That’s a 93% increase, which means that the Rockpals 500W will power your devices for 93% longer.

To understand what it means in everyday life, let’s imagine that we have a laptop with a 60W power brick.

The reason we multiply by 0.85 is to take the inverter efficiency into consideration.

A good way to know how much battery capacity you’re going to need is to make a list with every device you need to power/charge and for how long (in hours).

A 60W device uses about 60 watt-hours per hour, so if you know the wattage of your chargers you can easily figure out how much capacity you’ll need.

What the table tells us is that I am going to use 250 watt-hours a day based on my devices and hours of use.

Since I am going to be using the inverter to power my devices, we also need to take the inverter efficiency into account.

If you’re only going to be charging devices via USB or DC, the efficiency will be slightly higher, but I still recommend taking it into consideration when calculating.

So I should choose a power station that has at least 295 watt-hours of battery capacity, which means that the Rockpals 300W wouldn’t quite be large enough for me.

Remember that you can use the battery while it’s charging.

One way to make the Rockpals 300W work for me would be to connect a solar panel that would recharge the battery during the day or at least replenish some of the battery power that I have used.

This would only work if I was using the battery while the sun was out and didn’t use all of my devices at night.

The inverter in a power station changes the 12V DC battery power to 120V AC power and lets you use regular 120V devices via the AC outlet that looks like a household outlet.

There is a difference between the two here as well since the Rockpals 300W has a 300W inverter and the 500W has a 500W inverter. That’s a 66% increase in power output.

So what does it mean?

Well, if you have a 400W device, the 500W inverter will power it but not the 300W in the smaller power station since it exceeds the max output the inverter can handle.

Whether you need the larger inverter or not depends on what you plan on powering and how many devices at the same time.

Even though there is only one outlet on the smaller model, you can use a power strip to connect more than one 120V device.

The Rockpals 500W has two outlets, but the 500W inverter rating is the total wattage they will output together, not separately.

You might’ve noticed that the inverter rating has two numbers, a continuous watt and a surge watt.

The surge watts is how much the inverter can output for a very short time, usually less than 30 seconds.

When considering which power station to buy, you should ignore the surge watt rating and focus on the continuous wattage which is what will matter the most in day-to-day use.

As mentioned above, the Rockpals 500W has two AC outlets versus the single outlet on the 300W model.

You can use a power strip with either of them to power several devices at once, but it’s convenient to have two on the larger model.

There are 3 USB and a USB-C PD ports on both.

The USB-C PD on both of the Rockpals power stations can input and output power.

Which means you not only can charge your devices with it, you can also charge the battery in the power stations.

Both models have a QC 3.0 port. Note that your device must support QC for it to utilize the faster charging. Other USB devices can still be used.

There are five DC ports on both models. Both have a 12V cigarette port rated at 12V 8A but the 500W is the only one that has a regulated 12 volt outlet.

Last but not least, the input port is different.

It’s easier to find compatible solar panels for the 500W model since the connector is more common.

The input ports are different, and the 500W can handle slightly more input watts when charging.

The 500W model has a power brick that you must carry around, while the 300W model has the power management built-in and only requires the AC charging cable.

It takes 6-7 hours to charge both via the included wall and car charger.

The 500W model charges slightly faster with solar panels and can be fully charged in 6-7 hours with a 100W panel, while the 300W takes 8-9 hours with the same 100W panel.

There is a clear weight difference between the two, 7.7 versus 12.5 pounds.

The larger model is also nearly twice as large in terms of total volume.

Rockpals includes a wall charger, car charger, and MC4 to DC adapter with both models.

No solar panels are included with either battery.

Both power stations use lithium batteries and MPPT charge controllers.

They can both be used while charging and use a pure sine wave inverter.

There are lights built into both on the front of the batteries that are turned on with a button (two buttons on the Rockpals 300W).

On top of each, there is a built-in handle.

Last but not least, both power stations have holes on the side for ventilation.

Conclusion – Which Rockpals Power Station Is The Best For You?

So we’ve made the differences and similarities clear between the two solar generators. Now you need to figure out what you need.

Do you need the more portable and lightweight option that won’t run your devices as long?

Or are you willing to lose some portability for an additional outlet that is more powerful overall and lasts almost twice as long?

For my needs, the Rockpals 500W (click to view on Amazon) is the better power station due to the battery capacity on its own.

At most, I only need to power my laptop, phone, tablet, Playstation 4, and TV.

I would be fine with the 300W inverter on the smaller model, but being able to power my devices for almost twice as long before recharging the battery is worth it to me.

If you only need to charge phones, tablets, CPAP machines, and lights, the Rockpals 300W (click to view on Amazon) will most likely be enough.

But if you run a CPAP machine all night it might drain most of the battery and you would have to have a way to recharge the battery during the day.

If you live in an RV, car or van and have a solar panel on top of your vehicle, the Rockpals 500W would be the more safe choice since you would have that extra battery capacity for cloudy days.

You also wouldn’t have to rely on sunshine as much to recharge the smaller battery every day.

Now, maybe you’ve come to the conclusion that not even the 500W is enough for you, then I recommend checking out the best alternative power stations down below.

Since both power stations include the MC4 to DC adapter, you have a lot of options when it comes to compatible solar panels.

The nrgGo 400 is another great option with two AC outlets, USB C PD, and a great display that shows the most relevant information.

Please leave a comment down below if you have any more questions about the Rockpals 300W and 500W portable power stations.