Should You Get A Small Power Bank That Has Built-in Solar Panels?

Portable power banks have been popular for a while now, and I know that especially travelers like to bring along some extra battery power when they’re going to be away from outlets and USB ports for a while.

Lately, companies have started to build in solar panels into the power banks. So you’re able to charge the battery as long as the sun is shining.

Related Product: Increase the solar charging speed with a larger solar panel like the Nekteck 28W (click to view on Amazon)

But do they actually work and worth spending money on? The panels are obviously very small because it has to be kept portable, and even though a portable power bank might look small it can hold a lot of power.

A company reached out and asked whether we would be interested in reviewing one of these, and we agreed to since we would like to find the answers to the questions above.

The Solar Power Bank We Tested And Will Review

Of course, not all portable power banks with built-in solar panels are made equal. Our experiences with this specific brand and product will not apply to all the other brands out there.

It’s a little bit unclear what the company that make these is called, since no name is mentioned on the Amazon listing. 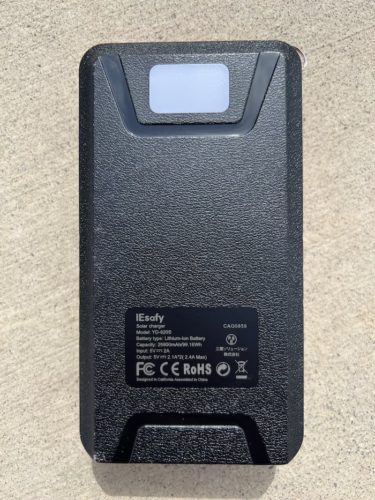 With a battery that large, you can recharge most phones 5-10 times and most tablets 3-6 times.

You can look up the mAh capacity of your specific device with the help of Google, then divide 26800 by it to get a rough estimate of how many times it will be able to charge that specific device from 0 to 100%.

There are two USB A ports and one micro USB port. The large USB ports are the outputs, and the micro USB is used to charge the battery.

The input is rated at 10W, but a wall adapter is not included.

You can charge two devices at the same time and up to 2.4V in total which is 12W.

The four solar panels fold out and according to the listing they are 1.5W panels, meaning that four can generate up to 6W.

There are battery bars to indicate the current charge of the power bank. These light up when you push the power button on the side of the battery.

It’s IP65 rated, which means that it’s water- and dust-resistant. You should not submerge the power bank in water, but some light rain will not hurt it.

Since the USB ports are covered, you don’t need to worry about water or dust getting in.

IEsafy includes a micro USB cable and a compass carabiner. The compass did not work right out of the box.

Last but not least is the built-in flashlight which shines really bright and can come in handy if you’re out camping.

My Review Of The Solar Power Bank

I like power banks that have a 26800 mAh battery capacity since I am a traveler and I need something I can bring onto an airplane. There is nothing to complain about there.

During my tests I didn’t have any issues charging my iPhone 13 Pro Max several times over.

It’s great that I can charge two devices at the same time with the two USB A ports.

It should have a USB C port in 2022 though, since most new portable devices use the newer USB type C port.

A USB C port could’ve been used to both charge and discharge the battery, instead of having the old, dumb, and slow Micro USB port.

The IP65 rating makes it so I can leave the power bank at my campsite during the day and not worry if it starts to rain.

I don’t recommend leaving it out in heavy rain, but in my tests it didn’t have any issues after being left out in a rainstorm.

Here is the thing with the solar panels, if you expect them to recharge the power bank fully and never having to use a Micro USB to charge you’re going to be disappointed.

Even if the panels would generate 6W while in sunshine (which I doubt, most likely closer to 2-3W), it would take 3-4 days if you get a full five hours of sunshine.

It got nowhere close to that far in my tests, and when using the more conservative 2W estimate, it would take over 10 days to charge it from 0-100% 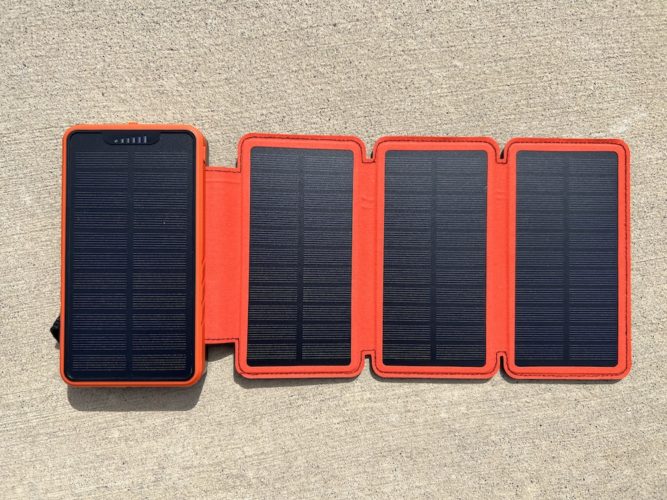 The solar panels are useful as an emergency backup, meaning that if you find yourself in a situation where you need to be able to charge a phone just to be able to start the phone and make a call, they will do that.

You should not take off on a camping trip and expect to be able to only use the solar panels to keep the battery and your portable devices charged.

If you understand this when you purchase it, you’re not going to be disappointed. Just be realistic and aware of what’s actually technically possible.

Even though it has a 26800 mAh battery, foldable solar panels, and a flashlight, it is portable.

It fits in all of my backpacks that I use for short trips, for long backpacking trips the 1.37 pounds will matter more. 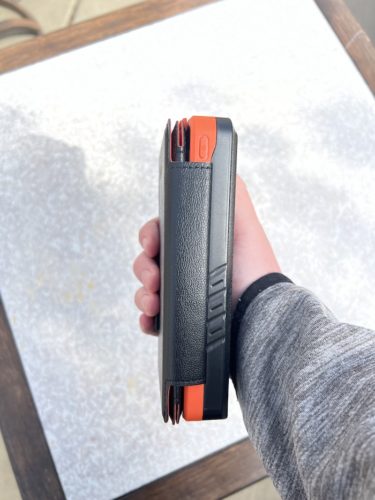 The question was – do solar power banks work and worth spending money on? In the end of my tests, my answer to the question is no, unless you’re a very specific type of buyer.

If you understand that the solar panels won’t be the main way to charge the battery, and are okay with only using them in emergencies, it’s not a bad product although there are better options on the market.

If you’re anybody else, buy a different power bank. I recommend getting the most portable 26800 mAh power bank, with USB C ports for both input and output.

Then if you would like to recharge the power bank with solar panels, buy a separate panel. There are lots of portable panels on the market with USB ports.

That way, you can plug your portable devices directly into the solar panel during the day and use the power bank at night.

I recommend the affordable Nekteck 28W solar panel (click to view on Amazon), but there are more advanced products with newer technology and USB C ports.

Please leave a comment down below if you have any questions or would like to recommend a different product for us to test and review.