Disclaimer: The Itehil IT500 was sent to us to be reviewed and tested. This is our honest review and opinion of this product after testing and using it while camping.

That is one of the panels compatible with this power station, by the way.

The product we are testing and reviewing today is the IT500, which is a portable power station that can be used in a lot of places.

When you go camping, during power outages, or anywhere you don’t have access to grid power and an AC outlet.

Being able to power and charge your devices during travels, camping, or emergencies is pretty neat.

Without further ado, let’s start by taking a quick look at the features then go into what we like and dislike.

The batteries used are LiFePO4, which explains why the power station is relatively heavy at 19.1 pounds.

With LiFePO4, you can expect more lifecycles out of the batteries, which means a longer lasting product.

A 500Wh battery will power a 50W device for about 8.5 hours if you consider the 85% inverter efficiency.

The built-in pure sine wave inverter can output up to 500W, with a 750W surge watts. You should not rely on the surge watts to run devices though.

There are two AC outlets, and even though they look like they would support plugs from other countries it does say 100V-120V so I would not risk it and plug any 220V devices into it.

The 12V cigarette port is not regulated, but since it’s LiFePO4 batteries, the voltage is going to be higher at a low state of charge than a Lithium ion battery.

When the battery was at 25%, the voltage read 12.25, which means that it should be able to power 12V fridge/freezers and CPAP machines without issues.

Since a DC 5525 to cigarette port is included, you can run two 12V devices at the same time. I tested both to see if they were regulated or not, and neither were. 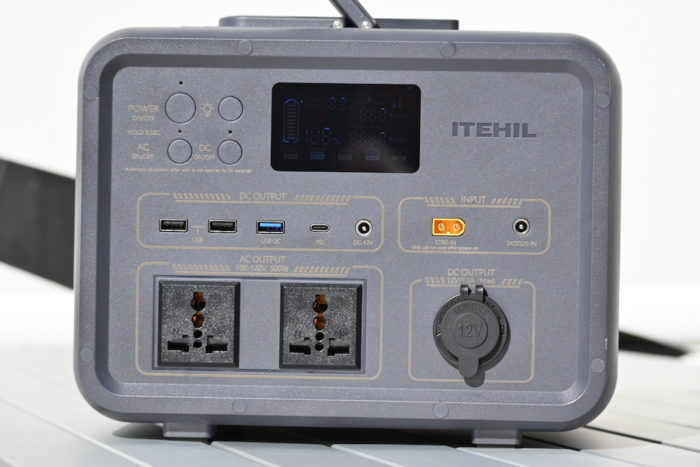 The four USB ports let you charge several devices at the same time. Three of them are USB A ports, and one of them is a USB C port. One of the USB A ports is a QC 3.0 port, so it will quickly charge compatible devices.

The USB C port only supports output, up to 60W.

The display doesn’t look very flashy, but it does give you some great information. It tells the input/output watts, active ports, time to empty/full, battery percentage, battery bars, and temperature warnings.

You can charge the IT500 with the included AC adapter, car charger, or solar panels. No solar panels are included, but you do get an MC4 to XT60 adapter so you can use third-party panels right out of the box.

It takes 4.5 hours to charge it with the AC wall charger, and based on my solar results it takes 7-10 hours to fully charge the battery with a 100W solar panel. 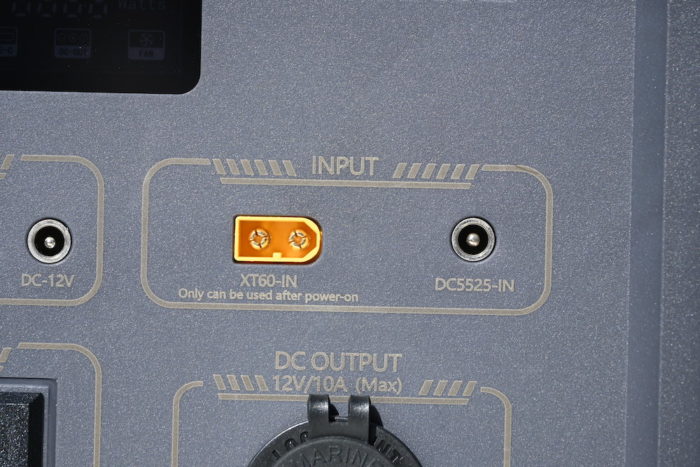 How long it takes to charge with solar depends on what solar panel(s) you use.

Itehil makes a 100W solar panel that is compatible and portable enough to bring with you during travels.

A flashlight on the side lets you use the power station as a light source. It’s controlled with a button on the front.

A handle on top folds up and makes it easy to carry the power station.

Itehil includes a storage bag that holds all the cables.

The cables included are the wall charger, car charger, MC4 to XT60 adapter, and a DC to cigarette port adapter.

Even though it makes the power station more heavy, LiFePO4 batteries will make the product last longer since the batteries can handle more lifecycles.

That’s a big plus in today’s world, and it means you get more out of your money.

There are a lot of ports on this solar generator for being a 500Wh model.

That’s more ports than you’ll find on similar power stations from other companies.

With a 60W USB C port and three USB A ports, I can charge my MacBook Pro, iPhone, and iPad at the same time without turning on the inverter. More efficient, and I don’t have to listen to the inverter fan.

You pretty much always get a wall and car charger, but I like that Itehil also includes an MC4 to XT60 adapter and a DC to cigarette port adapter.

There are not a lot of power stations with two cigarette ports, and the way it was implemented here is smart.

The included accessory bag is another plus, since it makes it easy to bring all the cables on a trip without making a mess.

There are three main things that I want to see on a power station display: input watts, output watts, and the battery percentage.

The Itehil IT500 has all of those and more, so while it’s not the most advanced display it tells you the most important things, in my opinion.

My only problem with the screen is that it’s very hard to read it when outdoors, it’s very clear indoors though even from a distance.

No charging via USB C

The USB C port can output up to 60W, but it can’t be used to charge the battery. It would’ve given you more options as to how you can charge it if it was also an input, which would’ve been great.

It’s pretty much impossible to see the screen outside during the day. That’s not uncommon with power stations though, and this will be a problem with most of them.

There is no way to control or monitor the power station with your smartphone.

Not a regulated 12V cigarette port

Note that even though this is something we don’t like, it’s not as big of a problem as with other power stations since the LiFePO4 batteries won’t drop to 9 or 10 volts even when fully discharged.

Please leave a comment if you have any questions.