Disclaimer: The XTAR SP100 was sent to us to be reviewed and tested. This is our honest review and opinion of this product after testing and using it while camping.

Is The XTAR SP100 The Perfect Portable Solar Panel For Travelers?

Solar panels come in a lot of different shapes and sizes. Some are small and light enough to pack in a backpack, while others weigh 30 pounds and are permanently installed on roofs.

Then there are some that are like a mix of the two, and that’s the type we will be taking a look at in today’s review.

The XTAR SP100 is a portable panel that folds to become flat and easy to store or bring with you on a road trip while offering a stand that makes it angle and leave the panel out during the day. 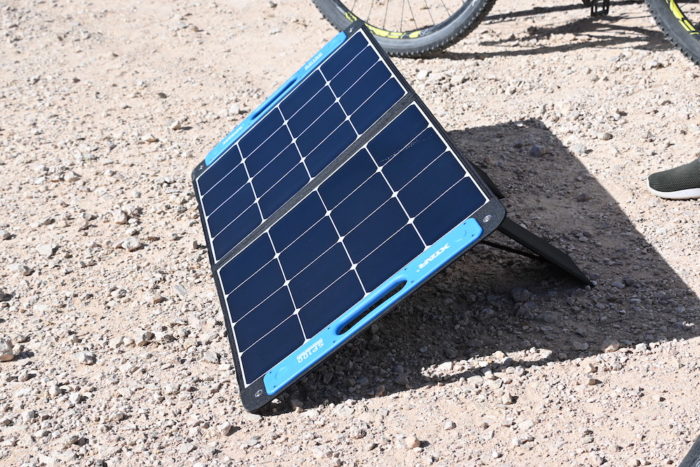 It looks very similar to some of the most popular portable solar panels on the market, but it has one neat feature that makes a lot of sense, the external USB station. I’ll explain how it works down below.

Without further ado, let’s start by talking about the features and then about what we like and dislike about this specific solar panel.

The XTAR SP100 uses mono-crystalline solar cells, which is more efficient than polycrystalline.

It’s rated at 100W peak power, but in my tests I saw it do up to 108W which is very impressive since it’s not often you see a panel overperform.

According to Xtar, it can provide 93W to the Xtar power stations (we might review that in the near future).

With an open circuit voltage of 23.76V, it’s compatible with portable solar generators from brands like Goal Zero, Jackery, and EcoFlow.

The built-in stand makes it very easy to put the solar panel on the ground and angle it towards the sun. Since you can put is as low as 25° and as high as 45°, it’s useful during all hours of the day.

Of course, you can also put the panel on the ground or against a wall, but to maximize the energy generated you should always angle the panel directly towards the sun.

This will help generate as much electricity as possible, especially during morning and evening hours.

A 10ft 8mm cable stored in the zipped storage pocket on the back of the panel connects to the most popular power stations on the market. 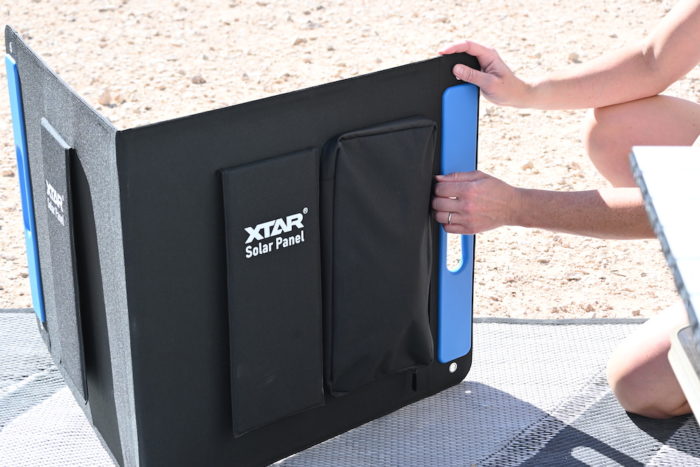 One unique feature about the SP100 is the external USB station.

By plugging the 8mm cable into the DC7909 input on the USB station, you can keep the solar panel in the sun while you let your devices charge in the shade.

There are three USB A ports and one USB C PD port on the USB station.

One of the USB A ports supports QC 3.0 and the USB C PD port is rated at 45W. That means that it’s fast enough to charge the latest smartphones, tablets, and laptops that support USB C PD charging.

There is also a small LCD screen that shows the volts and amps for every port.

It can also be used with a 12V cigarette port in a vehicle or on a power station on cloudy days, since Xtar includes a cigarette plug to 8mm adapter.

The panel folds and becomes very flat. Magnets are used instead of latches to keep the panel closed, and the built-in handle means it’s easy to carry and transport the solar panel.

The MC4 to 8mm female adapter can be useful if you have a portable power station that doesn’t have an 8mm input, like an EcoFlow product. 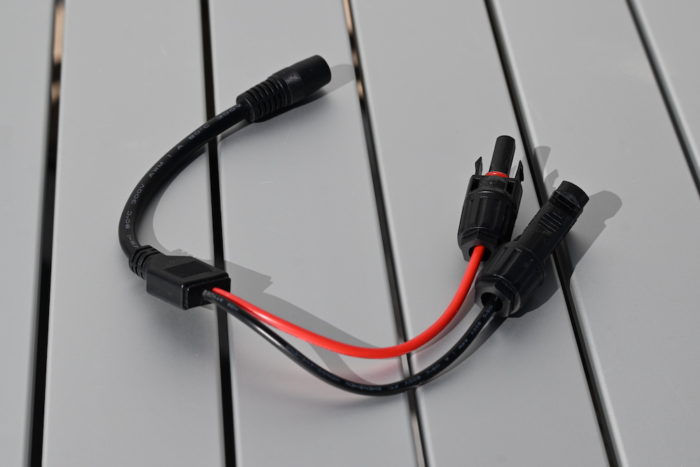 Since EcoFlow includes an MC4 to XT60 adapter with most of its solar generators, the XTAR panel can still be used to charge it.

I like having an external USB station instead of the ports directly on the panel, since it makes more sense.

Being able to put the solar panel in the sun and connecting/disconnecting your charging cables wherever you want within 10 ft is more convenient.

It’s so flat when you fold it together, and the magnets holding it together makes it easy to setup and take down in seconds.

Just like we’ve seen on other similar panels, the handle is built-in and makes it easy to carry the panel. 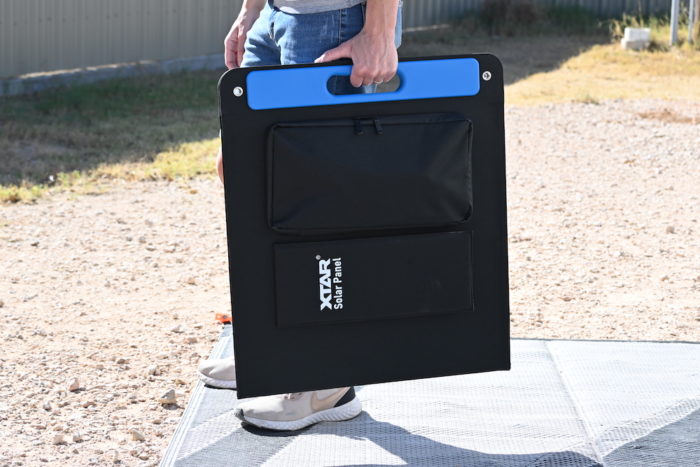 A built-in stand is a necessity to be considered a great portable panel, in my opinion.

Some people hang panels on their vehicles though, which is where the grommets can be used. You could of course also use the handle for this. 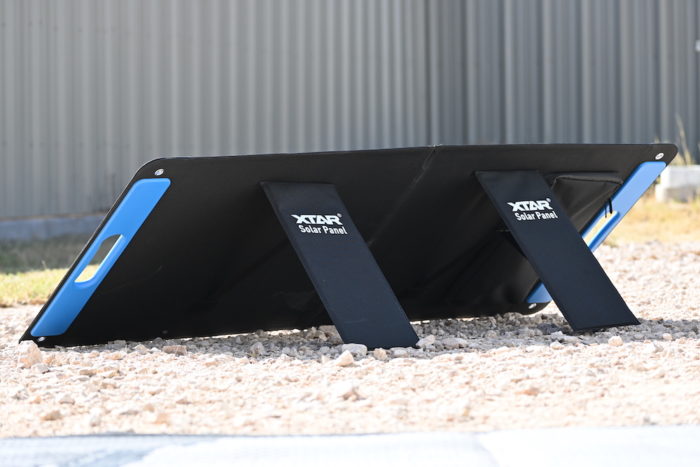 The more adapters, the merrier!

I appreciate it when companies consider the different ways you’re going to be using the product.

Xtar includes a way to plug the USB station into a 12V port in a vehicle or a power station, an MC4 to DC 8mm female adapter, and an 8mm to DC5525 connector for power stations with that type of input.

The thing I do wish a panel like this would have is a protective storage bag. Since the panel is made with fabric, it can get very dusty when used outdoors and if you bring it inside you’re going to bring the dust inside.

A protective storage bag could be useful to keep dust and debris both in and out.