Disclaimer: This product was sent to us for free, in exchange for a review. We were not paid by Oupes to do this review but we did receive it for free. All opinions expressed in this post are based on our personal views and experiences.

We are living in a time where power outages, fires, hurricanes, and other disasters are becoming more and more frequent.

Solar generators can make a big difference in how we deal with these types of disasters since they’re basically portable electricity.

Oupes is a new solar generator company that currently sell two different models. One with an 600W inverter, and one with an 1100W inverter. 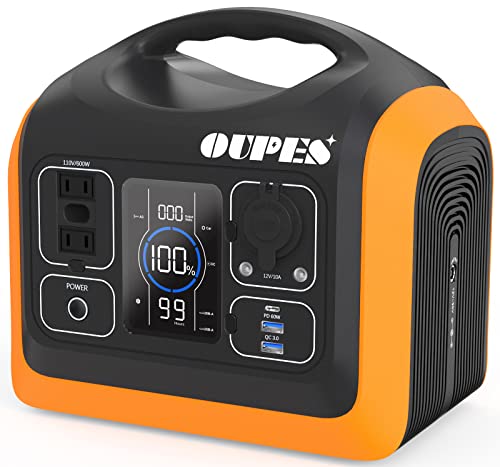 Oupes reached out to us and asked us to review the smaller model of the two, and what caught my eye was the fact that it uses lithium iron phosphate (LiFePO4) batteries instead of the more common lithium ion polymer (li-ion).

LiFePO4 batteries have several advantages over li-ion, and the one that matters the most to me is the expected lifecycles.

Every other power station I have reviewed have had a rating of 500 cycles to 80%.

This means that if you would drain the battery from 100 to 0%, 500 times, the battery capacity would be at 80% of its total capacity when it was new. So a 500Wh battery would have 400 useable watt-hours. 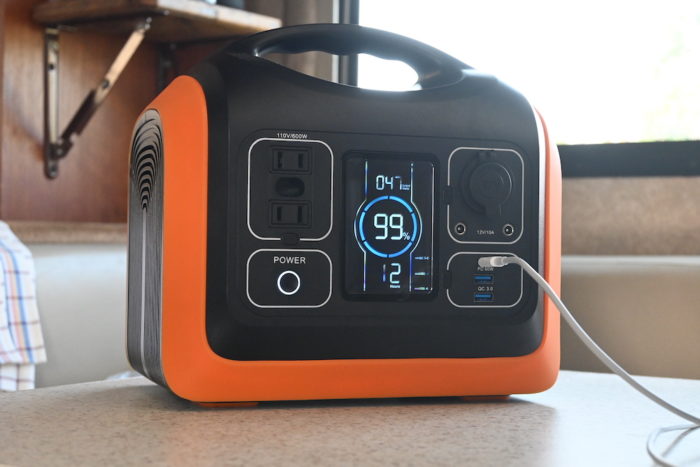 That number is not set in stone though, since there are several factors that play in to how many cycles your specific power station can go through before “losing” 20% of its original capacity, but that’s a post for another day.

So how many cycles should you expect to get out of the Oupes 600W? Well, Oupes advertise that it will do more than 3600 cycles.

It does not state whether that’s to 80% or less, but since it uses LiFePO4 batteries, you can definitely expect it to hold its capacity longer than a li-ion battery.

Now that we understand what’s special with the batteries used, let’s take a look at the rest of the features, and then go through what I like and don’t like about this unit.

The number 600 in the product name not only stands for how powerful the inverter is, but how much battery capacity the power station has. The exact number is 595 watt-hours.

The 600W pure sine wave inverter powers the two outlets on the front.

A pure sine wave inverter is better than a modified sine wave, and you shouldn’t have any issue powering an AC device as long as it requires less than 600W to run.

It will, however, power smaller devices like laptops, phones, 12V fridge/freezers, CPAP machines, and fans. It also does power my BLACK+DECKER 5-Cup Coffeemaker (500W).

The USB A ports are QC3.0, which means that they support up to 18W with compatible devices. 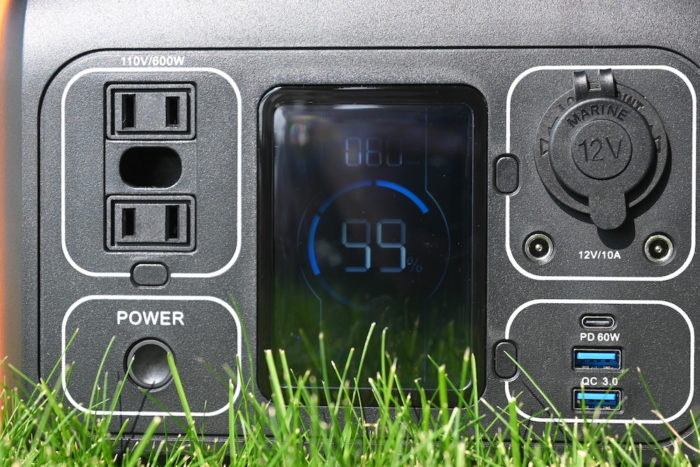 On the side there is an 8mm port, which is an input port. This is where you will plug in the wall charger, car charger, and solar panels.

All ports are can be used while the battery is charging.

Next to the ports, there is a large display that clearly shows the battery percentage. It also tells you the input/output watts, active ports, and time to empty/full.

The solar charge controller wired to the 8mm port allows up to 100W of input, although you can also use the USB C PD port to add another 60W.

It takes a little over seven hours to charge the battery from 0 to 100 percent with the included wall charger.

If you have a compatible USB C PD charger that can output 60W, the total charging time can be brought down to five hours.

The car charger is slower, requiring over ten hours for a full charge.

When connecting solar panels, you can use any third-party panel as long as it has a VOC rating between 12-30V. The 8mm connector is a common one and included with most foldable portable panels on the market.

If you have a solar panel with MC4 connectors, you’re going to need an MC4 to 8mm adapter to connect it to the Oupes.

I recommend the Rockpals 100W and Jackery SolarSaga 100W. Neither of them require any extra adapters.

For a rigid panel, I recommend the Renogy 100W which requires the MC4 to 8mm adapter.

There are also smaller panels, but I recommend using at least a 100W panel with a 600Wh power station.

There is a built-in LED bar/flashlight on the back of the power station.

My Review Of The Oupes 600W

More lifecycles means a longer lasting product. A power station with LiFePO4 batteries is heavier than a li-ion power station, but I prefer the more durable batteries.

Remember that if you take care of the batteries, it’s going to last even longer.

I do this by keeping my power stations between 20-80% at all times, unless I am going to be storing it for a couple of months. Then I keep it plugged in and at a 100% state of charge.

I’m a big fan of USB C PD ports, especially when they’re both an input and output.

The fact that I can charge using the 8mm port or the USB C PD port is great, and something I am going to criticize others for not including in future reviews. 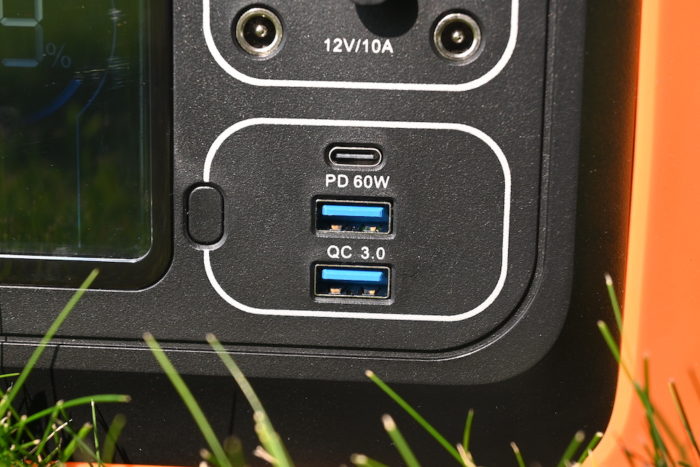 The display on the Oupes 600W is one of the best displays I have seen yet, and I understand that it might sound hyperbolic due to the simplicity of it, but let me explain why.

Because the battery percentage is large and centered, I can tell from far away how much battery is left.

I don’t understand why not more companies understand how useful this is – it’s like most manufacturers don’t use their own products.

In addition to the battery percentage, it tells you the input/output watts and how long it’s going to take (in hours and minutes) to fully charge/drain the battery depending on what you’re powering.

Sure, it weighs 15 pounds, which is relatively heavy for a small power station, but when you consider the LiFePO4, the 600W inverter, and all of the ports, it feels compact for the features it packs.

The handle on top is awesome, and it’s easy to carry around with only one hand.

A regulated 12V port will output a consistent voltage, which some sensitive appliances like a 12V fridge/freezer requires.

It’s a little bit higher than most regulated 12V ports at 13.66V, but that shouldn’t be an issue with most devices.

Ecoflow and Goal Zero has set the bar when it comes to including WiFi capabilities in smaller power stations, so I am going to mention it as a con when a power station doesn’t have it.

If you’re looking for a power station with LiFePO4 batteries, the Oupes 600W is not a bad option.

It has a little bit of everything, and it does stick out when compared to something like the Jackery Explorer 500 and Rockpals 500W.

It will do a great job not only as backup power, but for RV and campers that do a lot of boondocking in the wild.

I’m curious to see what Oupes is going to do next.

Please leave a comment if you have any questions or something to add to the article.