Oil In Propane & How It Affects Your RV

If you’ve recently started experiencing issues with the propane appliances inside your RV like occasional popping and even issues with lighting the first thing you want to check is the RV propane regulator.

To check the propane regulator for oi,l first turn off all the propane tanks connected to it and disconnect them.

Then using a wrench, unscrew the main line coming out of the bottom of the regulator.

Related Product: Did you know RV Propane Detectors (click to view on Amazon) need to be replaced every 5-10 years? Make sure yours is still up to date before your next camping trip. 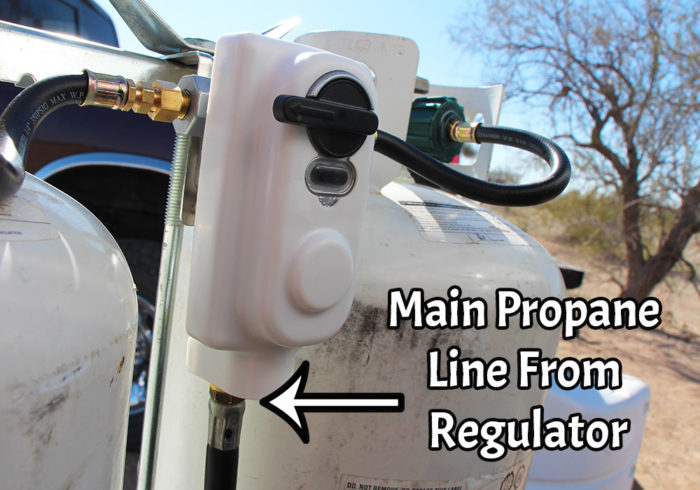 If oil immediately starts coming out of the RV propane regulator and gas line, that is most likely the source of the problem with the appliances.

Oil in the propane lines starts to clog things up after a while. It makes it hard for the propane gas to flow at the correct pressure to make everything run as it should.

It can take a while for enough oil to build up to start coming out of the gas orifices of the fridge or water heater but it can happen if the issue is not taken care of fast enough.

Why Is There Oil In My RV Propane Regulator?

Propane or LP gas is liquid petroleum that is a byproduct of crude oil. Because propane comes from oil, there is always going to be a little bit of oil in it even when refined properly.

Normally this small amount of oil isn’t an issue but it can slowly start to become one over time for a number of reasons.

This can cause liquid propane to get into the regulator, which can be damaging to the sensitive diaphragm inside. It can also leach more oil than normal into the system.

If you add overfilled propane tanks to cold temperatures the odds of getting some liquid propane and lots of oil trapped inside the regulator are increased.

Propane turns to gas at a slower rate in cold weather and using an appliance that uses lots of propane like a furnace with a super full tank could cause some issues.

Another less likely cause could be from the source you bought your propane from. RVers can get propane from all over the place from traveling around and sometimes the propane mix just isn’t the greatest.

There is also some speculation that the Ethyl Mercaptan that is added to propane to create an odor could also become an issue if too much is added to the propane.

If the stuff leaking from the RV propane regulator is really smelly that may be what it is.

Either way, if there is any kind of oily liquid dripping out of the propane regulator it could become a serious issue if not fixed.

What Do I Do If There’s Oil In My RV Propane Regulator or Propane Lines?

Unfortunately getting oil out of a propane regulator and even the propane lines isn’t always possible.

When it comes to the RV propane regulator the easiest thing to do is to replace it. You aren’t going to be able to properly clean out the oil inside without damaging it.

Luckily, replacing an RV propane regulator isn’t very difficult and it can be done by most people who are used to fixing a few things around the house and RV.

Click here to see how to replace an RV propane regulator

Now for the trickier part, the propane lines.

If you’ve just noticed the oil dripping from the regulator or propane tank connection you may have caught it early and there won’t be too much oil in the RV propane lines.

You may be able to drain it for the most part by leaving the main propane line pointed down overnight.

Then after reinstalling the replacement RV propane regulator you can try and clean up the system a little bit more by purging the lines a few times.

This can be done by slowly turning on the propane tank to get the propane flowing through the lines.

Once they are filled with propane light one of the burners on the RV stove.

Then turn off the propane tank and let the stove continue to run until it has burned away all of the propane left in the line.

Do this a few times to try and get the lines back to normal again.

This method isn’t going to be as good as a full replacement and if there’s a ton of oil you may need to do some more major cleaning that I’ll talk about next.

See Also: Propane Tank Recertification: How & Where To Get Recertified

After removing the RV propane regulator you will have to start working your way down the propane line to see how far the oil buildup has gotten.

Note this only needs to be done if there is a lot of oil build up. This chore can be quite a bit of work and if you aren’t comfortable working with propane lines I recommend getting a professional to do it instead.

If the oil has gotten far enough down the line you may even need to clean the gas lines in the RV appliances as well.

When there’s a ton of oil in a gas line it’s easier and more thorough to just replace the clogged line than trying to clean it.

If you’re lucky the worst of the oil won’t be very far down the line and you will only need to replace a few parts. 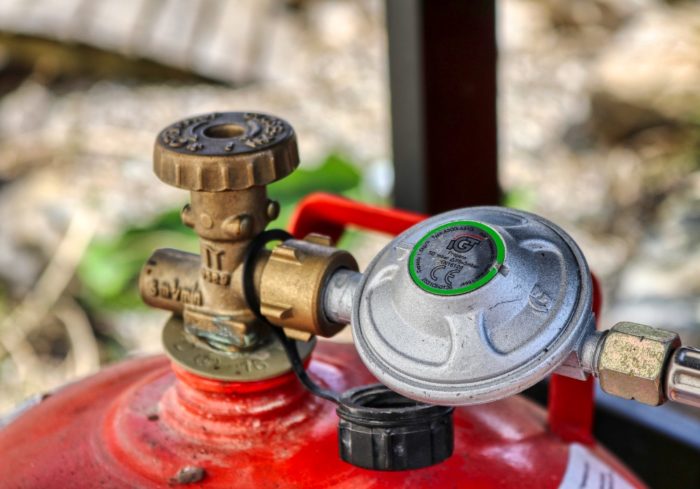 Oil in RV propane regulators and lines is a more common issue than you might think.

It’s a good idea to add checking the propane regulator for oil to your regular maintenance list to help stop propane oil from becoming a major problem.

Also, make sure your propane tanks aren’t being filled above 80% regularly.

Propane dealers aren’t supposed to fill the tanks above 80% but it happens a lot because the seller is either trying to get more propane into the tank to sell or they think they are doing you a favor.

See Also: How Does An RV Propane Regulator Work?

Overfilled propane tanks aren’t good for your camper’s LP gas system. It’s also a safety issue since there is no room left for gas expansion if the propane tank starts to heat up.

It’s going to be easier to just stay at the safe line than to replace the regulator or possibly all of the pipes later on.

Have any more questions about oil in RV propane regulators and gas lines? Leave a comment below.

3 thoughts on “What Does Oil In An RV Propane Regulator Mean? + How To Fix”