Even though it’s often referred to as a solar generator, most of them don’t include solar panels but are sold separately.

Related Product: We use the reliable VMAX 100Ah AGM battery (click to view on Amazon) in our RV along with portable power stations and solar panels.

There are a couple of power stations that do include solar panels or are at least sold as part of a kit with a solar panel, and that’s what we’re going to look at today.

The first battery in this review is a power bank and not a power station/solar generator.

But I decided to put it on here since it’s a popular product that might be enough for most people that only need to charge electronics like phones, tablets, speakers, and lights and don’t necessarily need an AC outlet or a massive battery.

Now, let’s take a look at the products, then I will do a quick overview/review of each.

At the bottom of the post I will also list a couple of solar generators and solar panels they’re compatible with directly out of the box. 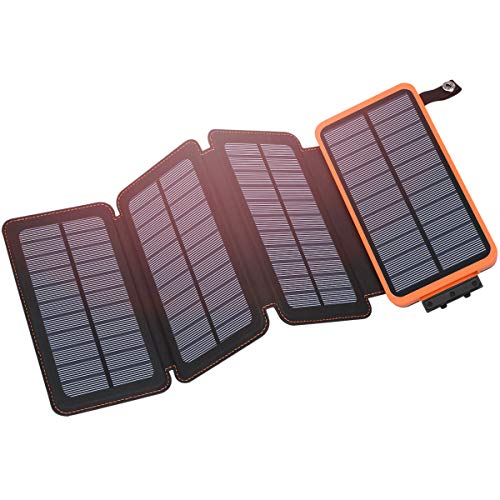 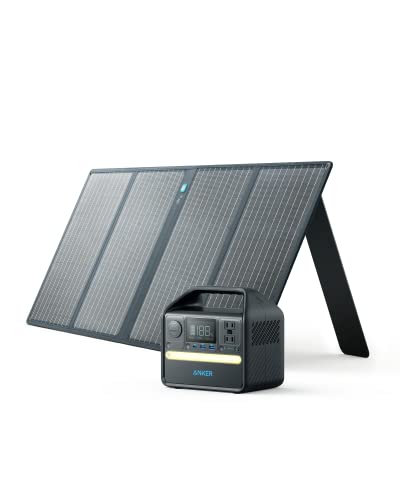 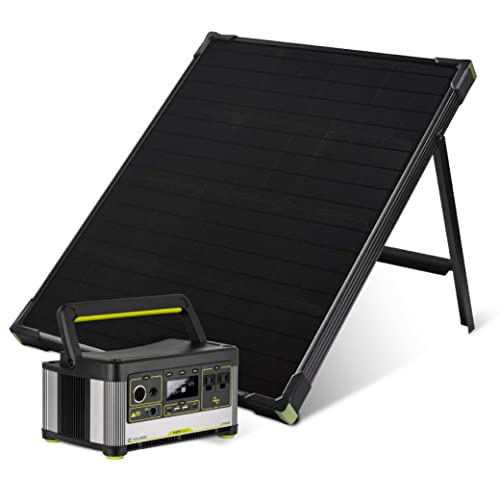 The Hiluckey 25000 mAh power bank is a portable battery with two USB ports. It has four panels built-in that folds out that will recharge the battery.

The dual USB ports can output 2.1A at 5V, so it will charge phones, tablets, speakers, and lights at a relatively fast speed. You can charge two devices simultaneously.

A hook on top makes it easy to hang the battery pack on a backpack, so you can charge the batteries while hiking.

In addition to the battery and solar panel, there are 9 LED flashlights with three modes. Normal, SOS, and strobe.

The Hiluckey solar charger isn’t a solar generator, but a power bank with solar panels built-in.

It’s great for keeping your devices charged when backpack hiking, but the solar panel isn’t strong enough to be a reliable power source if you need to charge your phone every day.

The Anker 521 power station 100 watt solar panel kit will be the perfect setup for most people that want to keep their devices charged while camping.

There are two AC outlets (just like outlets in your home) that can output up to 200 watts continuously.

That means that you can charge electronics like a laptop or a Nintendo Switch.

It’s also enough to power most LED TVs 42 inches or smaller. It would power an 80W TV for a little over 3 hours.

There are also two USB ports, a USB C port, and a 12V outlet.

The Anker 521 power station comes with a wall charger, car charger, and a DC adapter port so you can power 12V devices you usually stick in the 12V port in a vehicle.

A screen shows the power consumption and battery status.

The 100W solar panel folds to a portable size with a built in handle.

It’s too big to fit in the average sized backpack, but it’s small enough to be stored in a small car or van.

It plugs into the Anker 521 power station with an included 8 mm adapter and will recharge the battery in about 4 hours of good sun.

The Anker 521 Power Station w/ 100W Panel is a good little kit that will be enough for most tent campers.

If the largest thing you need to power when you go camping is a laptop, CPAP, or a Nintendo Switch, the 200 watt inverter and 526 watt capacity will be more than enough.

Its 100W panel will provide a charge when the sun is out.

If it’s cloudy you can start up a gas generator or a vehicle and charge the battery with the wall/car charger.

If you want a suitcase complete with both batteries and a solar panel, the Renogy Phoenix might be the one for you.

It has a 246.24 watt-hour battery and a 20W solar panel built-in, so all you have to do to start charging the battery is open the suitcase outdoors in the sun.

A 150W inverter will power the single AC outlet. With a battery and inverter this size, you could power a 100W TV for almost 2.5 hours.

In addition to the single AC outlet, there are four USB ports, two DC ports, and one cigarette lighter port that lets you use devices you would usually plug into a 12V DC output in a car.

To charge the battery faster, you can buy an expansion panel separately (click to view on Amazon).

I own two of these 100W suitcases, and they’re excellent solar panels.

The pheonix also includes an MC4 to DC cable that is compatible with the expansion panel so you can plug it in right out of the box.

You can also charge the Phoenix with the included wall charger, or in a vehicle with a car charger.

The suitcase-style design makes the Renogy Phoenix easy to carry and store.

I like the Renogy Phoenix due to the design that makes it easy to carry and store.

Sure, it won’t charge very fast with the built-in 20W panel, but it will be enough for most days if you only need to charge or power small electronics.

For daily use, I would invest in the 100W expansion panel.

Goal Zero is one of the most popular brands in the portable power station category. A big reason for that is that they’re an American company located in Utah.

This kit comes with a power station that has 505Wh battery capacity and a 300W inverter that powers two AC outlets.

The USB A ports are rated at 5V, 2.4A, so you can quickly charge devices like phones, tablets, speakers, and lights.

The 8mm input on the Yeti can handle up to 180W input, so the 50W solar panel included isn’t the maximum you can use. It does, however, only have one input.

With a 300W inverter, you can power things like a TV and a gaming console at the same time, or a gaming laptop.

It will power TVs, speakers, laptops, tablets, CPAPs, and lights without any issues.

The 505 watt-hour battery will power a 50W device for around 10 hours.

The included 50W panel will charge the battery in about 14 hours of good sun.

You can also charge the Yeti 500X with the included wall charger, or the car charger that is sold separately (click to view on Amazon).

A larger panel that is directly compatible with the Yeti 500X is the Boulder 100 (click to view on Amazon).

The Goal Zero Yeti 500X + Boulder 50 kit is a good kit because it offers a lot of battery power and a solid solar panel.

It does take a long time to charge the battery from empty to full, but if you don’t drain the battery every single day (by using a 50W laptop for 10 hours) it won’t be a problem.

Nature’s Generator is a large power station with a 720 watt-hour battery capacity. It has a huge inverter that can output up to 1800W simultaneously.

There are three AC outlets, two USB ports, and one 12V DC port on the solar generator itself.

The 100W solar panel included with the kit has its own wheels and a built-in stand so you easily can move and angle the panel towards the sun throughout the day.

A screen shows you the battery level and the output watts, so you can monitor what’s going on.

With a power station this size, you can power your whole RV camper.

You would just need a 15A to 30A dogbone adapter (click to view on Amazon) if you have a 30A camper. Camco also sells a 50A adapter.

The solar generator would power everything in your camper except for the air conditioner.

It looks like a large cooler and is quite heavy at 90 pounds. The large handle and heavy-duty wheels will assist you when its time to move the unit.

The Nature’s Generator Gold System is a massive unit, but it has a large inverter and a battery that will power a 50W device for about 14 hours.

It’s not for everybody, and it’s not the most portable power station on the market, but for some, it might be exactly what they’re looking for.

You don’t have to buy a power station that includes a solar panel to get a setup that is easy to set up and use.

Here are a couple of solar generators and solar panels that work together and are easy to connect even for people new to this technology.

The links below will take you to the product page on Amazon.com for the specific product.

Can The Power Station Power My Device?

It depends on the limits of the inverter in the power station and how many watts your device requires.

If your device requires 500W and the power station has a 300W inverter, it won’t work.

But if your device requires 50W and the inverter can output 100W, it will power it.

Most devices have a sticker or some kind of information on it that tells you how many watts it requires.

If you can’t find it, you can plug your devices into a Kill A Watt (click to view on Amazon) which will tell you exactly how many watts your device(s) are using.

Then you’ll know how powerful of an inverter you need.

Understand the difference between 500Wh and 500W when you look at the information about a specific power station.

The 500Wh (Wh=watt-hours) is the battery capacity while the 500W (W=watts) is the inverter’s max output, in other words, the number of watts it can power at most.

How Long Does It Take To Charge A Power Station?

If you know the battery capacity of the power station and the input watts a wall/car charger or solar panel can generate, you can divide the two to get an approximate number.

What Should I Look For In A Power Station?

You should first decide whether it’s more important that is has a lot of battery capacity or a large inverter.

I also recommend buying a lithium power station and not a lead-acid power station. Lithium is lighter and better in general.

The pure sine wave inverter is better and safer to power sensitive electronics.

Although a modified sine wave will run electronics like phones, tablets, and laptops fine as well but not as efficient.

Last but not least, if you want to power a 12V fridge/freezer (click to see review of the best ones), you should get a power station with a regulated 12V cigarette port.

That will power the fridge safely until the battery runs out.

Unlike an unregulated 12V cigarette port that will power the fridge until the battery reaches a certain voltage, and the fridge will sense a low battery voltage and shut itself off.

Have any more questions about power station that include solar panels? Leave a comment below.